Fire and shooting incidents marred the observance of All Saints’ Day in Cebu.

Except for these, Senior Supt. Rey Lyndon Lawas, chief of staff of Police Regional Office (PRO-7), said the observance of the All Saints’ Day on Sunday and All Soul’s Day yesterday was peaceful.

He, however, asked Senior Insp. Alexander Nunez of Cordova police to explain why someone was able to bring a knife inside the cemetery.

Two persons were wounded in a stabbing incident inside a cemetery in Cordova.

The police will continue to be on red alert until tomorrow.

The fire reportedly started from the house of Carmencita Lina, 65, and was sparked by an unattended lighted candle.

Lina admitted that she left a lighted candle on the altar at the second floor of the house when she arrived home after visiting her departed loved ones. 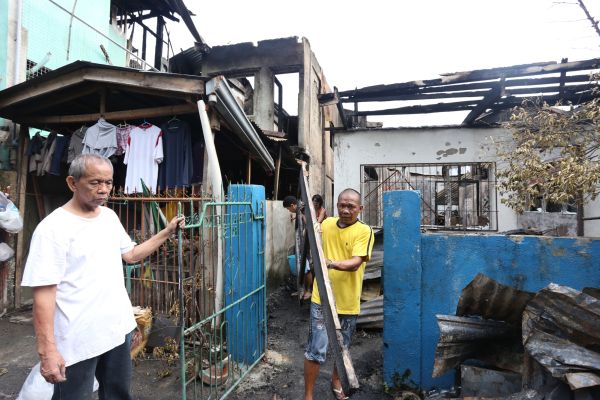 Alberto Caballero (left) checks what is left of his house after a fire that hit sitio Baca, barangay Apas early morning on All Saints’ Day. (CDN PHOTO/JUNJIE MENDOZA)

She was downstairs when she noticed that the house was on fire.

She was not able to save any of her belongings as she ran outside for safety and to ask for help.

SFO2 Nilo Cosido, arson investigator of Mandaue City Fire Department, said they received the alarm at 8:10 p.m. and put the fire under control after six minutes.

No one was hurt during the incident. Damage was estimated at P30,000.

Three houses were destroyed while three others were damaged.

Fire investigator Nelson Daculan said the blaze started in the house owned by Daria Caballero and may have been caused by electrical misuse.

The alarm was tapped at 2:10 a.m. on Sunday. It was placed under control after 20 minutes.

Daculan said Caballero’s son Emmanuel, who was left alone in the house, told them that the fire started in his mother’s room.

In Tuburan town, a 39-year-old man who just came from the cemetery was shot by his nephew at past 4 p.m. Sunday.

Rogelio Paling was reported to be in a serious condition.

PO3 Douglas Maravelles said suspect Dindo Ole, 33, offered the victim a drink but Paling refused as he still needed to travel back to Cebu City where he lives.

An argument ensued and Ole got a gun and shot Paling twice, hitting his chest and abdomen.

Ole was arrested by the police and a .45 caliber handgun with nine ammunition was recovered from his possession.

In barangay Tabunan, Cebu City, a man was shot dead by two unidentified men on a motorcycle.

Victim Melencio Borres, 37, was slaughtering a pig that he planned to sell to his neighbors when the men came and attacked him at 10 a.m. Sunday.

He was brought to the hospital, where he died.

Cebu City Mayor Michael Rama visited Poblacion Public Cemetery in barangay Pardo, San Nicolas Public Cemetery and Doña Pepang Cemetery before his last stop at the Carreta Public Cemetery, where he offered prayers for the victims of Sulpicio and 2GO  collision in 2014.

But rescue personnel and vessels remain on standby to respond to any maritime accident.