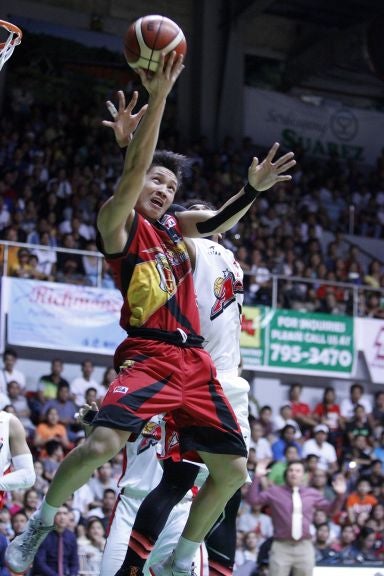 Alex Cabagnot of San Miguel puts up a difficult shot against the defense of Alaska’s Calvin Abueva. (PBA IMAGES)

The Alaska Aces once again turned it up in the fourth quarter to pull off a thrilling 82-75 win over the reeling San Miguel Beermen in Game 3 and take a commanding 3-0 lead in the best-of-seven championship series in the 2016 PBA Philippine Cup last night at the Quezon Convention Center in Lucena City.

Hulking forward Vic Manuel and crafty guard RJ Jazul came up huge when it mattered the most as the former scored 11 of his 17 points during that stretch to keep Alaska close while the latter sank two crucial baskets, including a jumper with 1:24 to go to put the Aces up for good.

Alaska will go for their 15th title in Game 4 tomorrow at the Philsports Arena.

No team in league history has ever come back from a 0-3 series deficit.

Buoyed by the play of their second unit, notably former University of Cebu guard Brian Heruela, Ryan Arana and Jay-R Reyes, the Beermen, who continued to miss the services of main man Cebuano June Mar Fajardo due to a knee injury, overhauled an early 12-point deficit and took a 41-31 halftime lead.

Though Alaska kept on pounding, San Miguel kept their composure and held a 58-55 lead going to the fourth.

However, Alaska had a fire lit from under them when Reyes was ejected from the game after a flagrant-2 foul was called on him for swinging his elbow into the face of Manuel at the 9:32 mark of the last stanza. This fired up Manuel, who scored eight straight points and later on, added a transition bucket and a one-handed turnaround jumper for a 72-68 Alaska lead.

San Miguel quickly tied the game at 72-all with a rare four-point play from Arwind Santos. The two teams then continued to trade blows with Cabagnot giving San Miguel its last taste of the lead, 75-74, off a well-executed inbounds play.

But Jazul proved to be too cool under pressure as he retaliated with a short baseline jumper to give the lead back to the Aces. Jazul sealed the game with a floater that bounced around the rim and in for a 78-75 Aces lead with 45.6 ticks left.