THE END OR EXTEND? 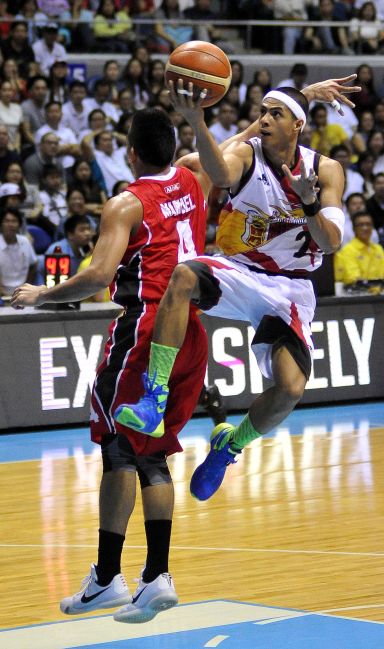 The match-up between Vic Manuel and Arwind Santos will be the duel to watch for anew when the Alaska Aces and San Miguel Beermen tangle tonight’s Game 5 of the 41st PBA Philippine Cup Best-of-Seven Finals at the Araneta Coliseum.
(INQUIRER PHOTO)

Will the Alaska Aces finally walk with the crown tonight or will the San Miguel Beermen get a new lease on life anew and keep alive their title-retention bid?

Those questions will be answered when the two squads collide for Game 5 of the 41st PBA Philippine Cup Best-of-Seven Finals at 7 p.m. at the Araneta Coliseum.

Balloons didn’t fall last Sunday when the Beermen gutted out a 110-104 overtime win in Game 4 to avoid what could have been the franchise’s first-ever sweep in a best-of-seven series.

Alaska still leads the series, 3-1, but another loss tonight could be fatal.

Though Alaska managed to erect a 3-0 series lead, Alaska coach Alex Compton said he still expected the Beermen to come out and put up a tough stand.

“It’s a series. Everybody is talking about sweep. It was a tough team with a bunch of winners that is well-coached. It’s not easy to sweep anybody,” Compton said.

“We’re up 3-1. I think in the Finals, the pressure is on both teams. I can’t imagine their coaches or Mr. Robert Non saying, ‘Ok lang matalo (It’s okay to lose).’ I don’t think the winningest organization in PBA history says, ‘Okay lang matalo. Na-injure naman si June Mar (It’s okay to lose because June Mar’s injured).’ That’s not how it works. I think the pressure is on both of us.”

“I just want to come out of this championship series with a title. It’s not going to be easy,” added Compton, who is looking to win his first crown as an Alaska coach.

The Aces are gunning for their 15th championship and first All-Filipino crown in 16 years.

San Miguel, which is eyeing its 21st title, will continue to miss the services of June Mar Fajardo, who is nursing a knee injury that he sustained in semifinal round.

“Before the game, I told the players, ‘give us a Game 7 and he will play,” Austria said after their Game 4 win that saw them clawing back from an 11-point deficit in the final 3:30 of regulation.

“His knee is progressing well and he can walk on his own,” said Austria. “February 3 is enough time. He wants to play and I’m the only one preventing him to practice because he’s the future of the PBA, Philippine basketball, of Gilas, of San Miguel, and I don’t want to aggravate his injury.”