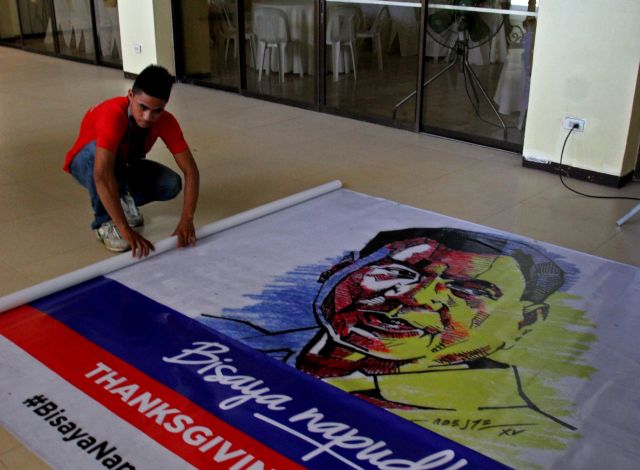 A welcome tarpaulin is delivered at the Cebu Country Club in preparation for the arrival of President-elect Rodrigo Duterte to the thanksgiving celebration of the “Bisaya Napud Movement.” (CDN PHOTO/JUNJIE MENDOZA)

Tough-talking President-elect Rodrigo Duterte got tougher last night as he upped the reward for each drug lord slain in Cebu to P5 million.

He also vowed to be even tougher on policemen, other law enforcers, and even elected officials across the country who would be found to be in cahoots or protecting drug lords and other crime groups.

According to Duterte, his tough stance against criminals was actually a “plea” for them to stop.

“I don’t want to use to use extraordinary means … I plead to all of you to stop fucking this country. If you do, wala tayong problema (then we have no problem),” he said before some 300 Cebuano supporters gathered last night at the Cebu Country Club in Barangay Banilad, Cebu City.

Duterte, who had previously offered P3 million for every drug lord caught dead or alive, raised the reward’s amount to P5 million if the criminal is caught or killed in Cebu because, he said, he liked Cebu.

Duterte was in Cebu for the thanksgiving party organized by the Bisaya Napud Movement, a private group in Cebu that helped him in his successful presidential bid. He got a million votes in Cebu City and province in the last elections.

The incoming president was likewise unfazed with the criticisms that he was promoting a “culture of death, by once emphasizing that he would not hesitate to go after criminals who would not change their ways.

“Kung dili madala og estorya, di patyon, e (If they could not be talked into changing, let’s kill them then),” he said.

The declaration was met by applause by those in the audience.

Duterte stressed that he protected the two million people of Davao City as their mayor and promised to do the same for the rest of the country.

He said the country would also be better off if the people would remain honest, especially in paying their taxes.

He added that if these were implemented, the country would be “free of the corruptions of the BIR (Bureau of Internal Revenue) and the Bureau of Customs.”

Duterte arrived at almost 8 p.m. and was greeted with cheers by at least 200 supporters composed mostly of businessmen and bloggers.

He came to Cebu on board a private plane from Davao City. He was received by Michael Dino, cofounder of the Bisaya Na Pud Movement and the incoming Presidential Assistant for the Visayas.

“We may have lost the battle during Promdi, but we will continue the war,” Cayetano said, referring to Osmeña’s failed presidential bid and push for a federal form of government in the Philippines under his Promdi party.

Osmeña was among those who attended the event last night and was later seated next to Duterte.

Incoming Cabinet secretaries, bloggers and businessmen were also among the guests who joined the event that started past 6 p.m.

Jonjie Gonzalez of the Bisaya Napud Movement said that although the Duranos of Danao City were related to the incoming President-elect, they were excluded as they supported the presidential bid of Sen. Grace Poe. Only those who helped in the campaign, like Osmeña, were invited to the event, said Jonji Gonzales, a co-organizer of the event.

The two-hour event was not for media coverage since it would be a private gathering of individuals who pushed to have a Bisaya in Malacañang.

“It will be an informal affair. Basta private affair lang. No media,” said Gonzales hours prior to the start of the party.

However, the party was streamed live on Facebook by Mugstoria, a Cebu-based news and entertainment and online site led by Gonzales.

The gathering ended after Duterte had delivered his message. After which, Duterte was expected to meet with lawyer Rex Fernandez of the Duterte Campaign Team in Cebu at the Adnama Building along Potenciano Larazabal Avenue in Mandaue City, Cebu.

Fernandez, earlier in the day, said that shifting the form of government to federalism would be among the topics that they would discuss.

The President-elect would spend the night at the Shangri-La’s Mactan Resort and Spa in Lapu-Lapu City and would fly back to Davao City this morning.

Duterte is also set to return to Cebu on June 25 for another thanksgiving party, which will this time be open to all his supporters.

Doris Mongaya, Visayas media coordinator of the Duterte Campaign Team and one a member of the One Love, One Nation Cebu organizing team, said they planned to hold the gathering at the Cebu City Sports Center (CCSC).

“This is open to all groups, all supporters, all individuals,” Mongaya said in a separate interview.

During the party, they would launch the Cebu Alliance for Change (#call4change) Movement which would serve as watchdog to monitor the implementation of pro-people agenda under the Duterte’s administration.