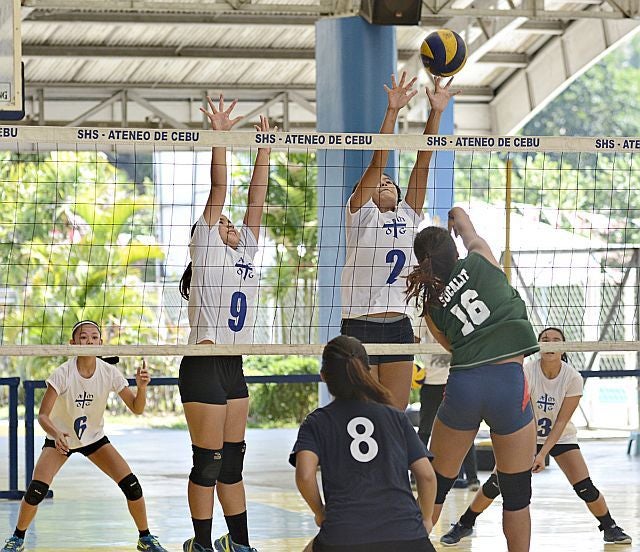 Crisley Sucalit (16) of the Southwestern University Cobras attacks in a game against the Sacred Heart School-Ateneo de Cebu in the Central Visayas leg of the Shakey’s Girls Volleyball League last May. (CDN FILE PHOTO)

After topping the region, the Southwestern University (SWU) Cobras have their eyes set on the national title as they begin their hunt in the Shakey’s Girls Volleyball League of Champions, which opens its curtains today at the Ynares Sports Arena in Pasig City.

The Cobras, who had an easy campaign in the regional level, winning all six of their assignments, will kick start their campaign tomorrow against Southern Luzon champions De La Salle Lipa (DLSL) at 3 p.m.

SWU mentor Roy Ulan is confident that the Cobras can unleash their spiking venom in the tournament with the addition of Sacred Heart School-Ateneo de Cebu (SHS-AdC) belle Jennifer delos Santos.

“Our goal is to play in the finals and be champions,” said rookie Head Coach Ulan.

De los Santos was added as a guest player for SWU after her notable play in the regional level, where she helped steer the Magis Eagles to a third place finish. Her performance there won her the Best Attacker and Best Server awards in the Central Visayas leg.

The top two teams in both groups after the elimination round will be playing in the knockout semifinals on Wednesday. The winners will then vie for the crown.