Hotel staff proves disability not a hindrance in finding job 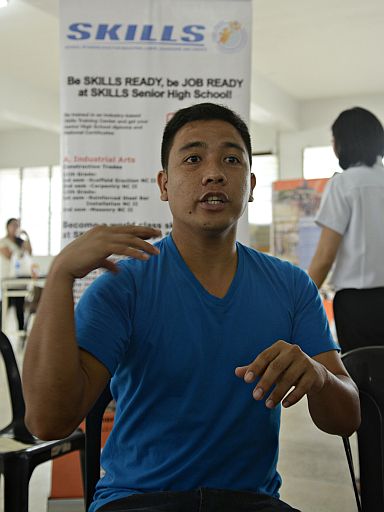 Despite his inability to listen and speak fluently, 33-year-old Deven Verano was proud to say that he was worth listening to.

Verano was introduced by his superior to the 25 hearing-impaired individuals, comprising the second batch of graduates, who attended the preemployment and livelihood seminar last Wednesday at the School of Knowledge for Industrial Labor, Leadership and Service (SKILLS). The seminar runs from July 1 to 31.

Abigail Yenco, training manager of Quest Hotel and one of the guest speakers of the seminar, introduced Verano and five other PWD employees of the hotel to the crowd of more than 20 PWDs who were looking for jobs.

“He (Verano) is a proof that if you keep applying, plus having a positive outlook in life, you will eventually get there,” Yenco said.

With fingers hovering across his chest and moving at a speed only people who are fluent in the universal sign language can understand, Verano sent a message to his deaf and mute brethren, saying that their disability should not stop them from applying for a job.

“He wanted to let everyone know that they should look at them as if they are not deaf, but are able to speak. He said there is nothing different about them,” his interpreter said in Cebuano.

Verano beamed when Yenco gave a brief glimpse of his performance in the workplace.

Verano has been working as room attendant of the Quest Hotel in uptown Cebu City for the past seven months. He is now a regular employee.

Verano was born with a completely defunct hearing system. He said his parents had to invent their own sign language to communicate with him. He recalled how his mother taught him their custom-made sign language.

Despite his condition, Verano vowed to get a diploma and land a job.

Although his classmates back then were able to accept his condition, but the Cebu City native said he still felt like an outsider.

He continued his secondary education in a special class for the deaf and mute at the Don Vicente Rama Memorial National High School in Barangay Basak-Pardo, Cebu City.

Verano then took a two-year course in Furniture Making at the Cebu Technology University Main Campus but after graduation, he said he was struggling to look for a job. For six years, he was unemployed.

Verano said it was hard to find a job for someone like him, and that there were times when he felt like being left out.

But despite these, he held his faith firmly, and continued to send out resumes.

One day, he sought the advice from a parish priest he tagged as Father Sarveno, who introduced him to SKILLS.

A day after, he went to SKILLS, which is located inside the former campus of Sacred Heart School for Boys on Gorordo Avenue.

After completing his two-year housekeeping training at SKILLS, he applied as an intern for Quest Hotel. It was there where Abigail Yenco, the hotel’s training manager, was impressed by his dedication to work.

He said he could not contain his excitement when he was informed by the hotel’s human resource department that he was already hired.

As room attendant of Quest Hotel in uptown Cebu City, Verano said it took a lot of courage to apply for the position.

The Primary Structures Educational Foundation Inc. (PSEFI) and SKILLS conducted the preemployment and livelihood seminar in line with the Persons with Disabilities (PWD) Awareness Month.