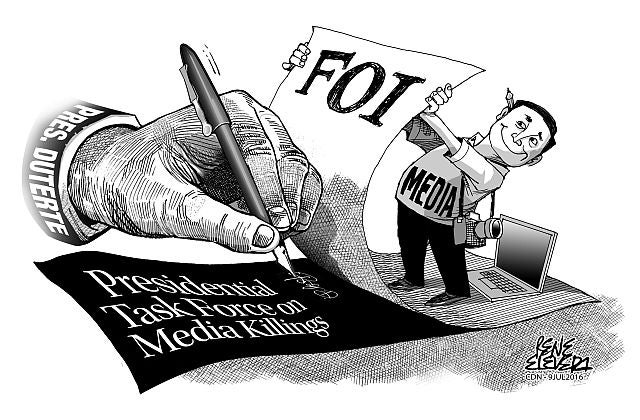 By this time or next week President Rodrigo Duterte may have made good on his promise to expand press freedom by signing an executive order granting freedom of information not only to media but to the public as well.

Under the order drafted by both Communications Secretary Martin Andanar and Executive Secretary Salvador Medialdea, the order would only cover the executive branch of government since it is a presidential order and thus doesn’t cover the legislature and judiciary.

And surprise, the President is also reportedly keen on approving the creation of a presidential task force on media killings. The proposal came weeks after President Duterte blasted the media for asking about his reaction to a call by a foreign media watchdog group for a boycott of his press conferences.

The call for a boycott stemmed from President Duterte’s remarks that supposedly justified the murders of allegedly corrupt media practitioners. It has been weeks since the ban on press conferences and ambush interviews was enforced and there doesn’t seem to be any letup in sight.

Thus it was no small surprise to learn of these two measures coming as it does amid an atmosphere of hostility between the President and media. The executive order will help not only media but the public in monitoring transactions and securing updates on government projects that Mr. Duterte said should be implemented without delay.

The FOI executive order at least is in keeping with the President’s order to government agencies to streamline their operations and processing. If they fail to comply then the President can through his communications team monitor the reasons why through both traditional and social media.

We hope this FOI executive order doesn’t stop at the executive level. The President’s order can serve as an impetus for Congress to enact an actual law on Freedom of Information that will allow the public access to public records on government projects and policies.

At the same time, we also hope that this presidential task force on media killings won’t be just a paper tiger. There have been attempts to address this concern for years but with the slow pace of the hearings on the Ampatuan massacre, those who prey on what Duterte described as “crusading journalists” were further emboldened to take on those who displeased them and exposed their crimes to the public.

There is some small measure of faith that the two measures will be acted on by the Duterte administration but actual implementation is yet another story. Still, the order and the task force should encourage the media to monitor and see to it that the President and his administration live up to their promise to provide accessibility and transparency in all their dealings.

Read Next
Calming the waters