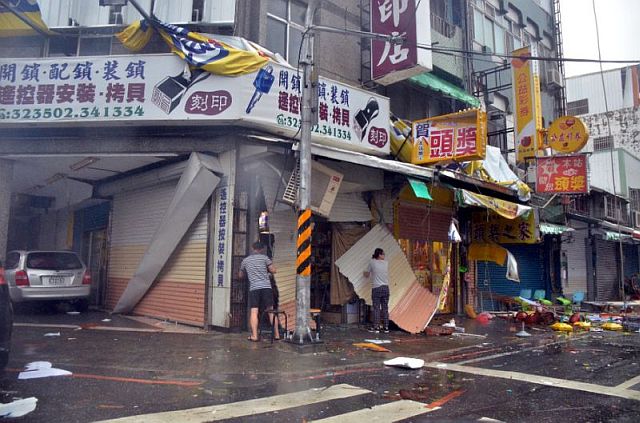 Debris scatter in front of a shop with broken shutters caused by strong winds of Super Typhoon Nepartak in Taitung, Taiwan.
AFP

Super Typhoon Nepartak brought chaos to Taiwan on Friday, forcing more than 15,000 people to flee their homes as the strongest winds in over a century lashed part of the island.

Ferocious winds battered the island at close to 200 kilometers per hour – with Taitung recording the strongest gusts in the county since 1901, according to Taiwan’s Central Weather Bureau.

A soldier who fell into the sea off Dongyin Island was found dead Friday, the day after a man drowned off a beach in Hualien county, according to an official tally.

Dozens of injuries were also reported, most caused by fallen objects.

The storm weakened as it passed over the island before leaving southwest Tainan City at around 2:30 p.m., heading for eastern China.

More than 15,000 people have been moved from their homes which were prone to landslides or flooding and about 3,600 of them were in shelters.

Nearly 4,000 people evacuated were in New Taipei City, which includes Wulai, a popular hot spring area near the capital which was cut off for days after Typhoon Soudelor ravaged Taiwan last August.

The defense ministry had stepped up evacuations since 2009, when Typhoon Morakot killed more than 600 people, many of them buried in huge landslides in the south.

As many as 466,000 households lost power due to the storm, with about 125,000 still without electricity as of Friday afternoon.

Read Next
PETER LIM NOT ON WATCHLIST