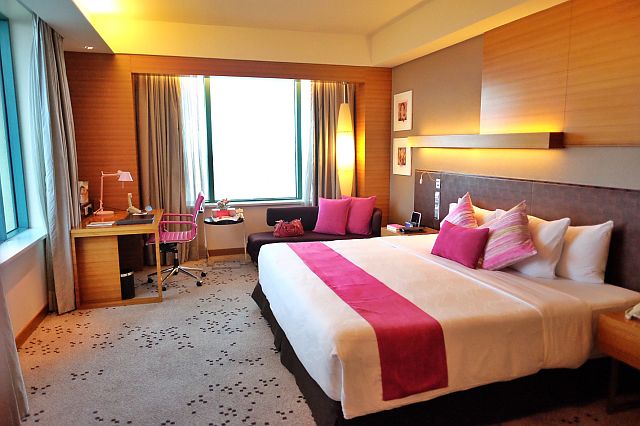 PIMPED OUT in pink, this business class room is available for theentire month of October with parts of the proceeds going to iCanServe Foundation. I love the fantastic view that looks out into the Mactan channel and this paper’s headquarters, just across.

WHEN I first started supporting Pink October, the consolidated Breast Cancer Awareness celebration in Cebu more than a decade ago, I appeared in photographs with cancer survivors. At this early stage of the movement, the subjects were all female.

One budding journalist, thinking he was clever, pointed out that I didn’t even have breasts, how was I to call myself the face of breast cancer? My rejoinder? “And you neither have insight, and yet you call yourself a writer.” There was a twinkle in the eyes of the late Salvador Malto, who was at the press conference as then head of the Clothes for Life Foundation, a group of fashion designers who lent their full support to the cause. “Ka maldita gyud nimo uy,” he said with an approving lilt.

Sal’s legacy continues as does my annual pledge to be of service to Pink October for as long as they will have me. Me-Anne Alcordo-Solomon, who I fondly refer to as my “breast friend,” a term she proudly bestows on her allies in this battle, has become a true icon in the fight for early detection. Herself a cancer survivor, she embodies true commitment to a cause that is quite literally close to her heart.

This month, a burst of pink envelops Cebu, with shining pockets of worthwhile private efforts aimed at furthering aid and education on breast cancer. Just this weekend, I called a business class room at the Radisson Blu Cebu home for a night, in a proper staycation that involved a few laps in the pool, dinner at Feria (I am addicted to the butter chicken at the Indian station!), pink drinks at the lobby bar (I tried both the Candy Cosmo and the Strawberry Mojito), and snored into pink pillows in a king size bed. 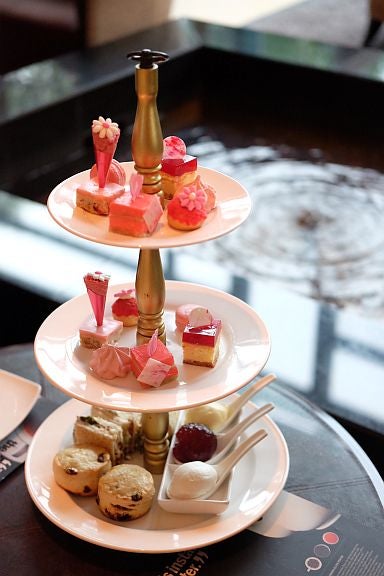 PINK SIGNATURE HIGH TEA, which satisfied my craving for scones and the quintessentially British clotted cream!

The campaign itself, dubbed Love Blu, Be Pink is not a discounted package, as best rates for the room still apply. What it is is a worldwide campaign across all Radisson Blu properties where they convert one room in the entire hotel into a pink sanctuary for the entire month of October. Portions of the proceeds for these rooms, however, go to iCanServe Foundation, which champions the cause.

The campaign extends as well to the F&B outlets, a personal favorite is the packed Pink Signature High Tea at the Dilmah T-bar at the lobby. Three tiers of treats (beetroot brioche sandwiches, quiche Lorraine, watermelon yogurt mousse, meringue choux, strawberry cheesecake, and strawberry cones) which I shared with Dr. Larisa Diaz-Roa this afternoon, with glasses of fizzy pink (ofcaws) Dilmah rosehip and hibiscus high tea.

Laryang, (her high school nickname) suddenly becomes quite distracted, peering intently into her mobile device. She raises a finger, connects with the touchscreen, and swipes upwards in a move that has becomes all too familiar to me. “I caught a Hitmonlee,” she smiles. The skilled obstetrician, who delivered my godson Nino Borromeo Boiser (who turns one this weekend, happy birthday dong!) safely despite a heartstopping complication that had me calling out forgotten saints, was hooked on Pokemon Go. And, apparently, the lobby of Radisson Blu (where, by sheer coincidence, I caught my first Pokemon) is where the rare ones converge.

As you get older, you tend to mellow. I haven’t called out anyone in a while, least of all writers who think highly of themselves. But I have found that the icing on the cake changes. For this quick staycation, the (pink) icing was my very first Scyther. With a CP of 555, thank you. Caught without lures or incense, and all from my king sized, pink-pillowed, Radisson Blu bed.

(To inquire about the #LoveBluBePink promo, call 402 9900 or email [email protected])