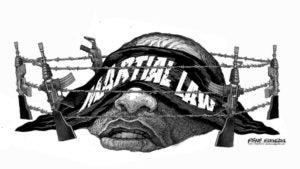 While those old enough to remember martial law as enforced during the 70s and early 80s will commemorate in one form or another Sept. 21, the date when it was declared by the late strongman Ferdinand Marcos, it won’t be a surprise if the incumbent administration prefers to divert public attention on their achievements than let Filipinos remember one of the darkest days in the country’s history.

That won’t happen in Cebu where martial law survivors will be joined by those old and young to commemorate the declaration of martial law and to air anew their reminder for eternal vigilance in guarding the country’s hard-won democracy amid troubling times.

In fact, the Cebu media community makes it a point to celebrate the annual Press Freedom Week by starting on or for this year within the days leading up to Sept. 21, when Marcos announced on live TV that his regime will impose martial law supposedly to deal with enemies of democracy who happen to be critical of his administration.

Echoes of the dark days of martial law may not be loud enough to hear for some who chose to forget or those who weren’t born yet but had parents that were young enough to have lived through that time.

But the signs are quite alarming. When the sitting president managed to jail a senator, oust a chief justice and perhaps jail another critical lawmaker within the first half of his term and do so with nearly zero opposition from Congress and the courts, one has to question just how stable the country’s democratic institutions are at this point in time.

It also doesn’t help that President Rodrigo Duterte once professed to the necessity of becoming a dictator or else nothing will happen to the country. But while he said doing this would dishonor his late mother’s memory, he isn’t one to deny his admiration of the dictator Marcos.

These contradictions in statements leave many to wonder just how close this country is to the edge of martial law. That’s not even taking into consideration the spate of deaths involving drug suspects that include local officials by way of drive-by shootings or summary executions.

In case the president’s communicators choose to forget or gloss it over, martial law remains in effect in Mindanao and the latest spate of bombings along with the deaths of seven peasants in Patikul, Sulu, cast doubts on the effectivity of its imposition.

In lieu of martial law, a climate of fear and impunity is prevalent where anyone with a hint of illegal drug involvement can be targeted by masked motorcycle riding assailants anytime of the day and critics of the administration including media being bullied and silenced into submission.