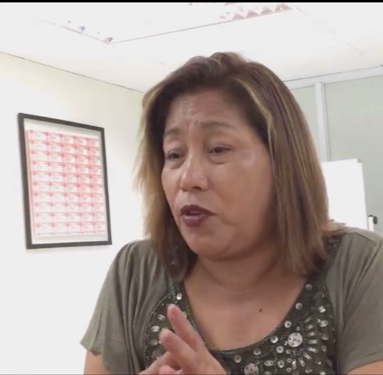 Arce/Photo by Morexette Marie B. Erram

Raquel Arce, Prevention Restoration Order Beautification Enhancement (Probe) team chief, said this in a press briefing on Friday at her office when asked about the condition of Cadungog, a casual employee of Probe, who was shot and wounded by an unidentified assailant last Thursday afternoon.

“He (Cadungog) is now recovering. He was placed under the intensive care unit (ICU), but he has gained consciousness,” said Arce.

Cadungog, who also happened to be the younger brother of former Tejero village chief and now councilor, Jessielou Cadungog, was shot past 4 p.m. Thursday along M.J. Cuenco Avenue in Barangay Tejero.

The younger Cadungog sustained a gunshot wound that pierced through his chin and upper neck.

During the press briefing, Arce said that she believed that the shooting was related to Cadungog’s job as a Probe team member.

She also said that her belief was boosted especially since there were alleged threats during last Wednesday’s postponed demolition operation in Sitio Silangan, Barangay Tejero.

She added that when the Probe team then headed by Cadungog was inspecting the area before implementing the demolition, they heard one of the residents allegedly threatening to kill anyone from Probe through a megaphone.

“The demolition was actually postponed due to the unfavorable weather condition, but I learned about the threat from the Probe members, who were there,” said Arce, who shared that she was not at the area then because she had to attend a court hearing.

She also said that Cadungog was the most exposed among the Probe workers since he did not wear a mask or used a cloth to cover part of his face to hide his identity at that time, and he also lived in another sitio in the barangay.

She also said that they were not doing anything illegal in their move to demolish stalls and structures encroaching in the sidewalk of Sitio Silangan because they were just implementing a court order.

Arce said that they had also coordinated with police to help catch the shooting suspects who had remained unidentified.

However, the residents of Sitio Silangan through their lawyer, Vincent Isles, denied Arce’s allegations.

Isles said that his clients told him that they had nothing to gain in eliminating Cadungog because even if he would be gone there would be others to take over his place.

Isles said that his clients were also hoping that Cadungog would recover from his wounds.

He also said that the demolition did happen but only nine structures were demolished after it rain which prompted a stop in the operation./dbs