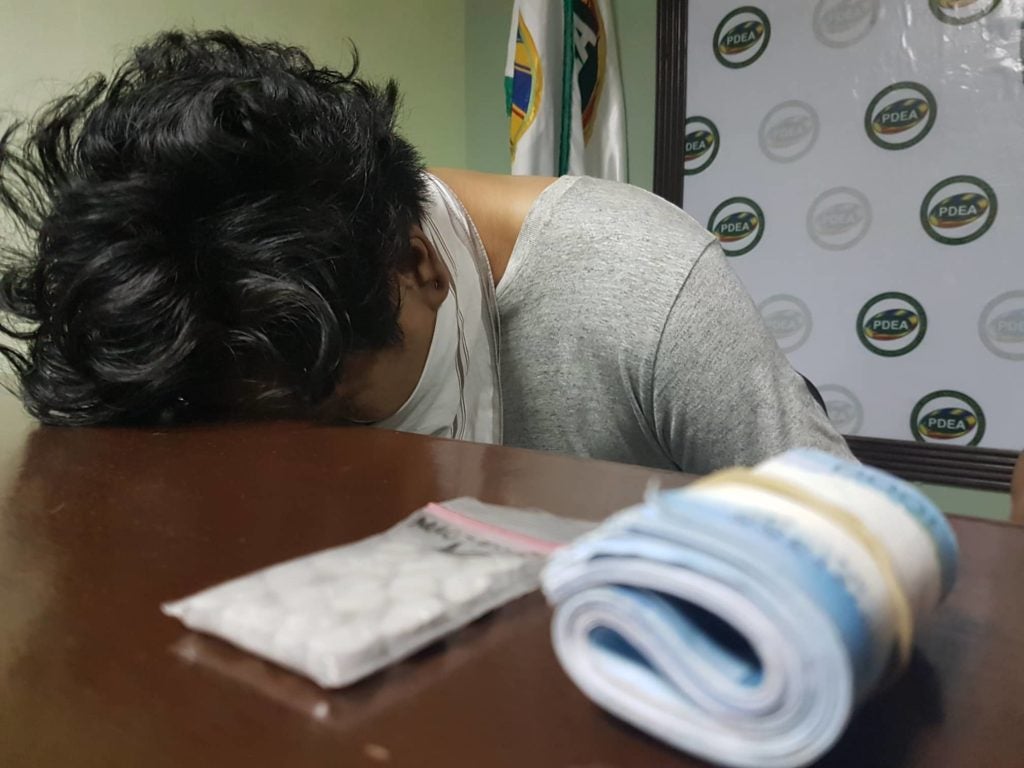 Elvin Joseph Laput, 24, covers his face when presented to the media at dawn of Feb. 8, 2019 following his arrest in Barangay Capitol Site, Cebu City. He is shown here with the stash of ecstasy and the bundle of P1,000 bills used in the joint drug bust operation by the Philippine Drug Enforcement Agency in Central Visayas (PDEA-7) and the local police. | CDND Photo by Benjie Talisic

CEBU CITY, Phillipines- The call center agent arrested  pre-dawn today, February 8, is believed to be one of the top dealers of ecstasy in Cebu City, the top official of the anti-narcotics agency here said.

Wardley Getalia, director of the Philippine Drug Enforcement Agency in Central Visayas (PDEA-7), revealed that  the suspect,  Elvin Joseph Laput,  could easily dispose of at least 15 ecstasy tablets a week and about a hundred a month of the pill.

Laput, only 24 years old, was arrested shortly before 1 a.m. today in an entrapment operation in Barangay Capitol Site, Cebu City. He was caught with 15 tablets of the party drug.

Prior to his arrest, Laput was placed under surveillance and was found to be hopping from one bar to another in Cebu City to ply his illicit trade.

According to Getalia, Laput has been uncooperative and has refused to them information on who was the source of ecstasy.

But Getalia said they had their own of generating information on his trading activities of ecstasy in Cebu City.

“Sa Cebu City lang natin siya namomonitor. So possible lang ang nagbibigay sa kaniya and we will be getting where this ecstasy came from,” Getalia told CDN Digital this morning, February 8.

The agency urged the public, specially young people who frequent clubs and bars,  to help them identify those dealers of ecstasy, assuring that the informants’ names and other personal data will be kept strictly confidential.

He also called on young persons who like to spend time in bars to immediately inform them of someone would introduce them to a recreational drug dealer.

Those party drugs,  Getalia warned, may put their life in danger.

The enhanced drive against party drugs came in the heels of last month’s death of Ashley Abad, a 19-year-old college student who collapsed during a pre-Sinulog party on January 19 and died a day later due to cardiac arrest and an alleged overdose of an unknown drug.

Abad, whose death has stirred the Cebuano community into demanding from authorities to address the proliferation of party drugs in the city, was believed to have ingested a drink laced with the drug.

READ    Ashley Abad: The bright, bubbly girl who can sparkle no more

The result of the autopsy on Abad’s remains is still to be made public.

Police authorities led by Senior Superintendent Royina Garma, the Cebu City Police Office director, are also growing impatient with the lack of cooperation from Abad’s boyfriend and other friends who were with her during the party and are now planning to officially subpoena them for questioning.

According to Getalia, they had been closely monitoring the trading of ecstasy in the city since January and had been asking establishments to cooperate in their drive./elb