No fanfare for BOPK for Friday’s campaign kick-off 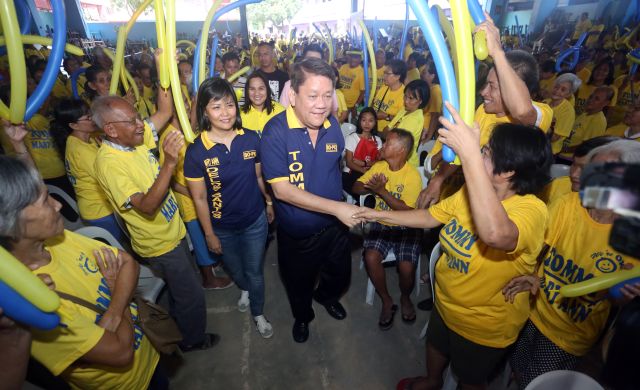 Cebu City Mayor Tomas Osmeña and her runningmate Councilor Mary Ann Delos Santos greets supporters during one of their sorties in this 2018 photo. | CDN FILE PHOTO

CEBU CITY, Philippines — The Bando Osmeña Pundok Kauswagan (BOPK) will not be holding any fanfare on the start of the election campaign period on Friday, March 29, but they promise to go full blast in their campaign on their opening salvo on Saturday, March 30.

Councilor Sisinio Andales, who is running for councilor of Cebu City’s North District, said the BOPK team initially planned to hold a motor caravan for their campaign kick-off but decided to choose a simpler start for their campaign.

Andales said that they would not want to cause any inconvenience to the public because of the expected traffic that the caravan might cause.

Andales said that a Mass would be held at the Guadalupe Church at 10 a.m. on Friday to kick-off the campaign, a tradition BOPK has upheld in the past elections.

After the Mass, a luncheon  will follow for the BOPK candidates and their families, which will be a,  simple unified gathering to kick off the campaign period that will end on May 13.

Although the BOPK chose a simple and less public kick-off for the start of the campaign period, they will go all out on Saturday, March 30, during their proclamation rally.

Andales said that they would be introducing both North and South Candidates publicly at the Cebu City Sports Complex on Saturday afternoon.

He said that some senators would be gracing the event including Cebu’s own Senator Sergio “Serge” Osmeña III.

The event, which will be open to the public, will serve as the “opening salvo” of BOPK’s campaign for the May midterm elections.

Andales said that the BOPK would continue to showcase the services they had already started to the Cebuanos as they took the majority seat and the administration in the past three years.

“Ipadayon namo among serbisyo,” he said.

(We will continue to serve the public.) /dbs