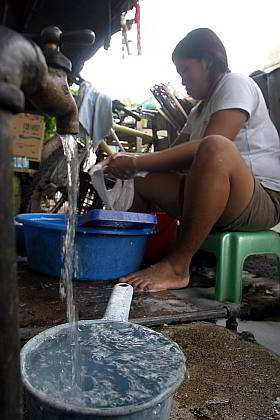 Will laundry be an even more interesting activity knowing there will be a 12% rate hike ahead? (CDN PHOTO/JUNJIE MENDOZA)

It’s part of the deal. A 12 percent rate increase is set to be implemented by the Metropolitan Cebu Water District (MCWD) for all its customers by July as a condition for the start of the bulk water supply contract tapping the Carmen river.

The last rate increase was done in 2006.

The utiity is just waiting for  approval of MCWD’s application by the Local Water Utilities Administration (LWUA).  There’s no need for a new public hearing, since this requirement was already satisfied in 2005, said MCWD general manager Amando H. Paredes in an interview yesterday.

Once the new rate is applied, piped water would cost close to P15 per cubic meter for consumers in Metro Cebu, he said.

The current floor rate is P13.60 per cubic meter for 10 cubic meters a month, which is the average consumption of a household.  (One cubic meter of water can fill five drums.)
Paredes said MCWD would continue to subsidize the cost of water and sell it to customers at lower than the actual cost of production, which is currently over P21 per cubic meter based on ground water pumping, the main source of Cebu’s potable water.

The subsidy is crucial since households account for 99 percent of MCWD customers.

With the entry of a private consortium,  the need to keep end-user rates affordable while gving investors a fair margin of profit, has been a prime concern.

The contract to supply MCWD is Cebu’s first bulk water project tapping surface water from Carmen town’s abundant river as opposed to extracting it from underground, endangering a limited aquifer.

The contract price agreed between MCWD and bulk water supplier Cebu Manila Water Development Inc. is P24.59 per cubic meter  or a total amount of P161,556,300 based on the contract signed by both parties last Dec. 18, 2013.

LWUA approval of the water rate adjustment  is a condition of the deal,  according to a copy of the Bulk Water Supply contract.

“This bulk water supply contract shall be binding and enforceable only upon the approval of the water rate adjustment requested by MCWD with the LWUA.  If, for whatever rason, no adjustment is granted by LWUA or a different formula is approved or fixed therefrom, MCWD may abandon, withdraw or not to proceed with this bulk water supply project,” per section 3 of the contract.

Manila Water, a private consortium of the Ayala-led Manila Water and the Cebu provincial government, is committed to supply and deliver 18,000 cubic meters per day for the first year and increase it to 35,000 cubic meters daily in succeedings years.

In an interview, Paredes said the proposed 12 percent rate increase already went through a public hearing in 2005 and got LWUA approval when the Carmen Bulk Water Project was first offered to the government-owned water district.

“We were ready to implement it (the rate hike) but the project did not push through for other reasons at the time. The increase was generally acceptable to the public when we had the public hearing. Now that the project has been revived and awarded, we went back to LWUA to ask for their approval,” said Paredes.

Paredes said LWUA officials explained that the water district doesn’t have to conduct another public hearing for the 12 percent increase since this was already held in 2005 for the same project.

The 12 percent increase will apply to all customer categories of MCWD.

The bulk of customers use less than 10 cubic meters a month and pay P13.60 per cubic meter.

Paredes said the water district is just awaiting approval from LWUA and hopes that it would come before July.

“The target start of delivery of the water supply by Manila Water is July.  We hope  to get their feedback by then. If not, we will not start accepting the bulk water supply just yet,” Paredes said.

He emphasized that even with the rate increase, consumers would still enjoy a substantial subsidy.

“The actual production and delivery rate is over P21, which means that the current rate of P13.60 has a subsidy of about P8. The increased rate of about P15 is still enjoying around the same subsidy.”

He assured that the new rates would remain affordable.

“We did a rate survey in 2010 and 2012 and found that our rates are still very far from the five percent of the income of the low income group, which is the cap limit set by LWUA. Even when the 12 percent increase is applied, we are still well within the five percent,” said Delgado.

The gap is mostly filled by private vendors and owners of household and commercial pumps, where experts unregulated extraction poses a danger to the aquifer, the underground layer where water is stored.

MCWD chairman of the board Rene Mercado earlier said a policy decision has been made for the water district to focus on improving its distribution system to serve most customers, and rely on private sector initiatives like Manila Water to develop surface water sources.

“Cebu’s economic progress is so fast that utilities were not able to keep up with demand,” he said earlier.

One estimate by Water Remind, a study by Dutch experts of Metro Cebu’s water situation, said that groundwater resources will be used to their maximum limits between 2020 to 2030.

Before that point is reached, Cebu needs to be ready with surface water sources like springs and rivers.

(CORRECTION ON STORY:  The consortium that partnered with the Cebu provincial government for the Carmen Bulk Water Project is composed of three entities: Manila Water Company Inc. , Metropacific Water Investment Co. Inc. and and VicSal Development  Inc. Together they form the Cebu Manila Water Develoment Inc.
Stateland Inc. is no longer part of the venture. The company was inadvertently mentioned as still being part of the consortium in the Fast Facts box in page 27 of CDN’s March 11 issue to support the front page story “12% RATE HIKE AHEAD”. The background was sourced from the corporate website but was apparently not updated. — Editors)