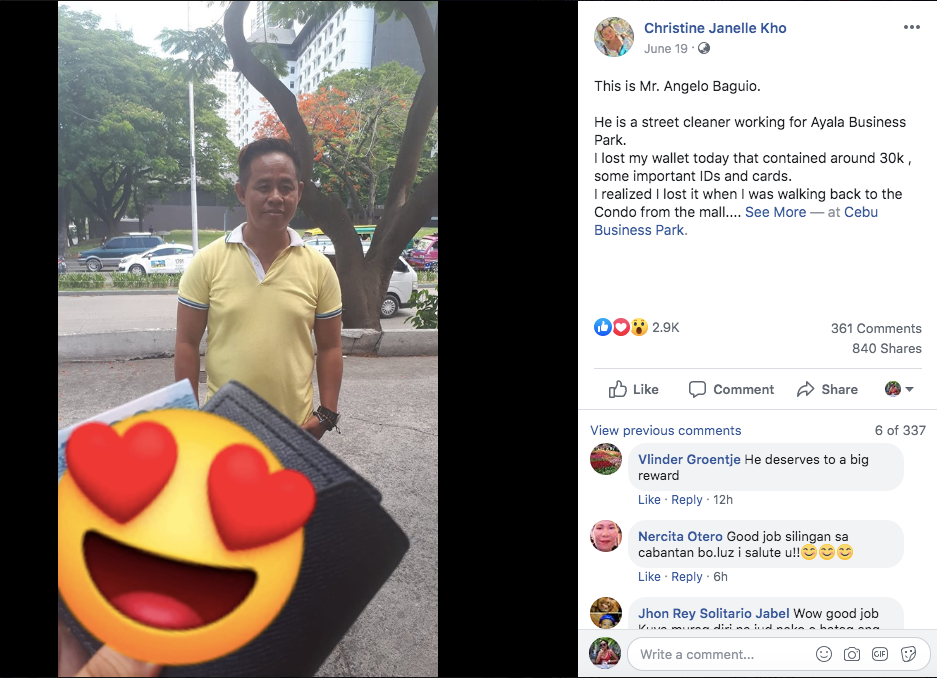 Cebu City, Philippines—  A netizen’s appreciation to the good Samaritan who returned her wallet goes viral.

Christine Janelle Kho, 23, a senior manager at a BPO company dropped her wallet along Ayala Business Park when she was on her way home and posted the incident on her Facebook account last June 19, which then garnered attention in the online world.

“This is Mr. Angelo Baguio.

He is a street cleaner working for Ayala Business Park.  I lost my wallet today that contained around 30k, some important IDs and cards. I realized I lost it when I was walking back to the Condo from the mall.
I was half-hearted about looking for it and tried to look for less than 10 mins because in my head, who would return it?
I already accepted the fact that it was lost.

But minutes later, my dad received a call that they found my wallet.
Mr. Baguio found it while sweeping in front of Solinea.

He returned it and refused to accept any reward. Faith in humanity restored.
Sana all” she posted.

“I’m from CDO and in my driver’s license he saw the number of my dad and called him,” she said.  They met each other at a bank in the area where Baguio returned my wallet with a happy face and Kho, on the other hand, is full of gratitude for the person who returned her wallet.

According to Kho, she just hanged her wallet on her ID sling and it was when she reached her condo when she noticed that the wallet is no longer there.

“He mentioned that he thought I was not from here and maybe needed my money back” she shared.

Kho was deeply touched by the gesture done by Baguio and said that the world was not all bad and that some people would still choose to do good.