Duterte dares US: Declare war on China and we will join you 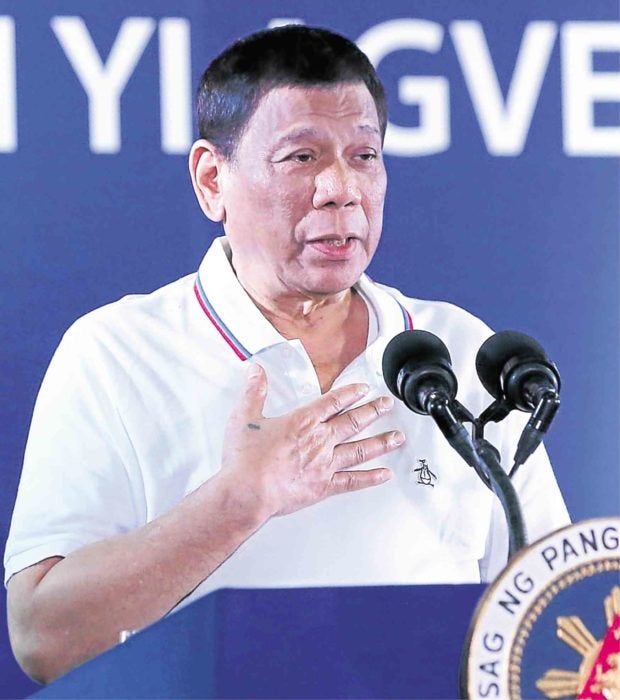 “Now I say, you bring your planes, your boats to South China Sea. Fire the first shot and we are just here behind you. Go ahead, let’s fight . . . We have an RP-US pact, so let us honor it. Do you want trouble? OK, let’s do it”
President Duterte

MANILA, Philippines — In another rant against the United States and critics of his handling of the maritime dispute between Manila and Beijing, President Rodrigo Duterte dared Washington to declare war on China.

No fan of Obama

“If war breaks out, I will drag them out,” he said in a speech on Friday night at the opening of Chen Yi Agventures Rice Processing Center (CYA-RPC) in Alangalang town, Leyte province.

The President has been critical of the United States, particularly former US President Barack Obama, for criticizing his bloody war on drugs. When he assumed office in 2016, he announced he would be moving away from US influence and would be boosting ties with China.

He later set aside the July 2016 ruling by the international arbitral court that invalidated China’s expansive claims over the South China Sea to warm ties between Manila and Beijing in order to get more Chinese aid and investments. The Philippines brought the challenge against China in 2013.

The South China Sea is one of the flashpoints in the US-China relations, which include a trade war, US sanctions and Taiwan.

China and the United States have repeatedly traded barbs in the past over what Washington says is Beijing’s militarization of the strategic waterway by building military installations on artificial islands and reefs. The Pentagon recently claimed that China test fired missiles from the islands recently, but this was denied by Beijing.

US Navy ships also sail periodically through the South China Sea purportedly to conduct “freedom of navigation,” which rails China.

“We can never win a war with China. But I hope China would not overdo things,” President Duterte said in his speech.

“There is always America pushing us, egging us … making me the bait. What do you think Filipinos are, earthworms?” he said.

“Now I say, you bring your planes, your boats to South China Sea. Fire the first shot and we are just here behind you. Go ahead, let’s fight,” he said. “We have an RP-US pact, so let us honor it. Do you want trouble? OK, let’s do it.”

The President was referring to the US-Philippines Mutual Defense Treaty, which some of his critics have said the country should invoke particularly in stopping Chinese encroachments into the West Philippine Sea, waters within the country’s 370-kilometer exclusive economic zone.

He said, however, the Philippines would just suffer if war broke out over the South China Sea. Palawan province would be the first to be hit as it is facing the waterway, the President said.

“I am not about to order my soldiers to go to the mouths of hell to die without a fight. I cannot do that,” he said.

“Well, we are poor. Perhaps if I were a President and given 20 years (to serve), in the Philippines, we would have five cruise missiles plus a cannon in every barangay,” he said.

The President has been criticized for showing aggression toward Western countries, recently threatening to declare war on Canada over Canadian waste shipped to the Philippines, but speaking softly about Chinese actions in the West Philippine Sea.

He came under fire again last month for playing down the sinking of a Filipino fishing boat after it was hit by a Chinese vessel, which then abandoned 22 Filipino crew members struggling to survive in the water for hours before they were rescued.

The President described the incident as a small maritime accident, and again said he would not go to war against China over it.

When he disclosed that he and China’s President Xi Jinping had reached a “verbal agreement” to allow Chinese fishermen to fish inside the Philippine EEZ, critics, including Carpio, again raised a howl of protest saying he violated the constitutional provision that said the resources in the maritime zone were exclusively for Filipinos.