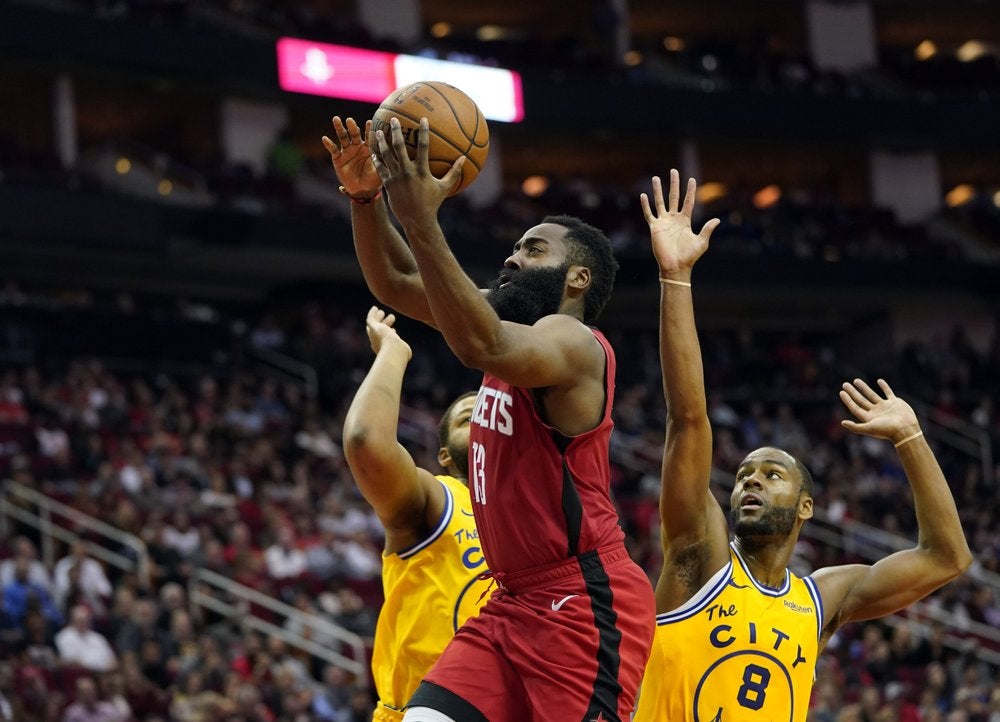 Houston Rockets’ James Harden (13) goes up for a shot as Golden State Warriors’ Alec Burks (8) and Omari Spellman defend during the second half of an NBA basketball game Wednesday, Nov. 6, 2019, in Houston. The Rockets won 129-112. | AP Photo/David J. Phillip

Harden again appeared to be moving past his early shooting woes, going 6 of 16 from 3-point range. Since going 17 of 79 on 3s in his first six games, Harden has made 13 of 32 the last two.

Russell Westbrook had 18 points, eight rebounds and six assists. P.J. Tucker had 22 points and 11 rebounds, Clint Capela added 19 points and 16 rebounds, and Austin Rivers was 4 for 4 from 3 with 12 points.

Houston and Golden State entered the game ranked 29th and 28th in the league in points allowed, giving up an average of 123.1 and 120.4 points per game, respectively. Neither team had played a game so far this season where they held their opponent below triple digits.

Both teams struggled with their shooting for spurts of the first half, but late in the second quarter, Harden drilled a deep 3-pointer where he was also fouled. That shot fired up both Harden and the Toyota Center crowd, including rapper Travis Scott, who was sitting courtside.

Houston led 63-52 at the half, thanks in large part to Harden’s 24 first-half points, but also Golden State’s 38.8% shooting from the field.

There were seven lead changes in the first half before Houston started to pull away.

To open up the second half, the Rockets held the Warriors to just three field goals in the first seven minutes of the third quarter and built a lead as large as 23 points. They entered the fourth quarter leading 98-83.