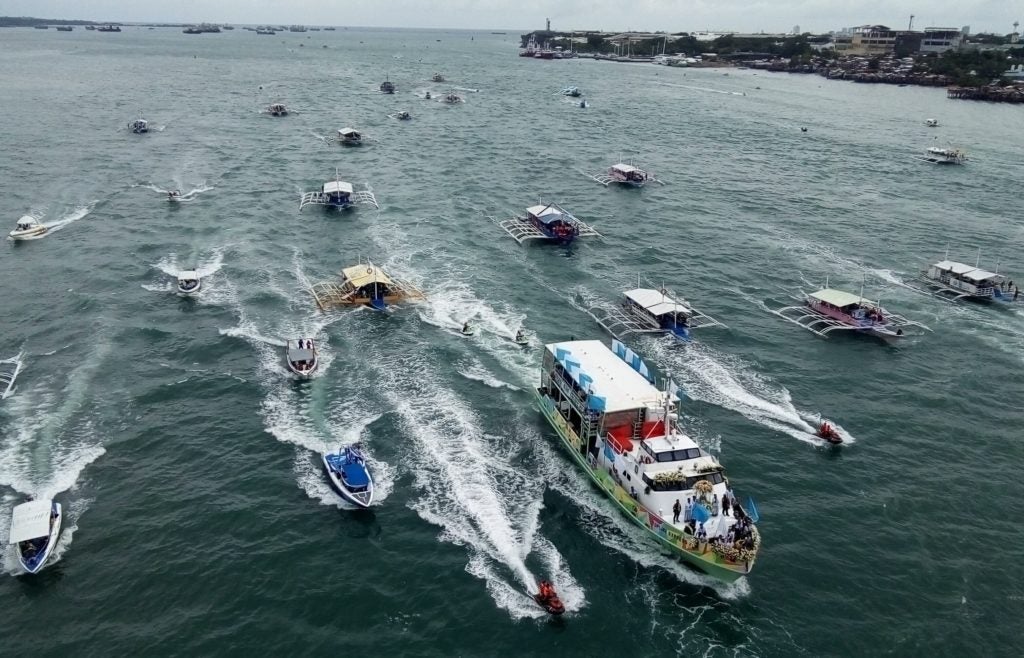 Devotees on colorful boats escort the vessel carrying the image of the Our Lady of the Rule during the November 12 fluvial procession along the Mactan Channel. | Norman V. Mendoza

LAPU-LAPU CITY, Philippines — The weather cooperated and the rough seas at the tip of Punta Engaño was not a hindrance as the fluvial procession of the image of the Virgin of the Rule from the Hilutungan side of the Mactan island to the Mactan Channel proceeded with only a few minor hitches.

Police Colonel Clarito Baja, Lapu-Lapu City Police Office chief, described the event as successful and peaceful with the sea procession of the Our Lady of the Rule that kicked off the activities leading to the parish’s fiesta celebration on November 21 proceeding smoothly.

“It was generally peaceful with no untoward incident reported and based on monitoring of the police,” said Baja in an interview with reporters on Tuesday, November 12.

He said, there were around a hundred police that were deployed for the security of the whole event from the fluvial procession ad in the land deployment.

These were also assisted by force multipliers and barangay tanods from the barangays concerned.

He added, thst the event has long been planned and coordinated with the Philippine Coast Guard who was in charge of guiding and safety at sea of of the seaborne procession.

A Philippine Navy vessel also helped secure the sea procession although the Philippine Air Force did not push through with the flower drop because of technical concerns.

Read more: Fluvial procession in Lapu-Lapu may be cancelled if bad weather persists

Earlier, organizers were readying their alternative plans if the weather would turn bad and the fluvial procession would have to be cancelled, but on the day of the event the weather was fine and the sea procession proceeded as planned.

Even the rough seas off the tip of Barangay Punta Engaño did not faze the devotees and the procession of the boat carrying the image of the Blessed Virgin and the 50 other colorful motorized boats sailed through the area without incident.

Aside from that, thousands of devotees from the shores of the coastal barangays would release balloons and lit fireworks as the boat carrying the image of the Our Lady of the Rule would pass by.

The image was sent off from the pier of the Pacific Cebu Resort in Barangay Suba Basbas at past 8 a.m. after a Mass was celebrated at the Marigondon Church.

As the procession passed the two bridges connecting Mandaue and Mactan, some of the devotees who had filled both bridges dropped flowers on the boat carrying the image of the Virgin Mary.

At past 10 a.m., the image arrived at the Muelle Osmeña port where the image was loaded at the back of the pickup truck and transported to the Virgin of the Rule Shrine, where a welcome Mass was celebrated.

Baja said that there were at least 5000 devotees who welcomed the image of the Our Lady of the Rule at the national shrine.

Meanwhile, Lapu-Lapu City Mayor Junard Chan said that he did not allow anymore the carrying of the image through the Andas from the port to the church at Barangay Poblacion as was previously practiced to avoid politicizing the event, a move that church officials agreed upon.

“My administration just hopes with the intercession of the blessed virgin that the Oponganons will be well and always show their support to this administration and so with the support of city and barangay officials,” said Chan.

Lapu-Lapu City will be celebrating fiesta on the 21st of November with nightly activities provided by different departments of the city government and other sectors with entertainments./dbs