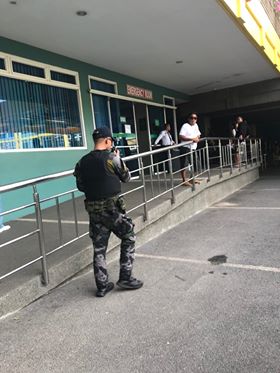 Policemen guard the entrance of the emergency room of a private hospital in Dumaguete City where Lawyer Ray Moncada was brought after he was ambushed by unidentified gunmen near his house in the city on January 3, 2020. |CDN Digital file photo

DUMAGUETE CITY, Negros Oriental, Philippines — After 10 days of fighting for his life, a lawyer who was shot and wounded by still unidentified gunmen, died in a private hospital in Dumaguete City at around 2 p.m., on Monday, January 13, 2020.

A member of the family, who asked not to be identified, confirmed to CDN Digital the death of Lawyer Ray Moncada, 74.

According to the family member, Moncada was connected to a life support until he succumbed to a single bullet wound from a .45 caliber pistol at the lower right portion of his back.

No other details were given.

Relatives also gave police investigators a letter from a certain “The Punisher” addressed to Moncada.

Entoma, in an interview with CDN Digital, expressed confidence that the investigators could still file an airtight case against the still unidentified gunmen.

He said the victim was able to tell the family about the threats he received prior to the shooting incident.

Entoma also said that the mobile phone of the victim would be submitted to the PNP Cybercrime Unit for examination.

(We will have it examined by the Cyber Crime Group. One of our objectives for this would be to get circumstantial evidence that we can link to the killers and the mastermind of the crime. There is a mastermind. That is what we will look into and the other information that the lawyer conveyed to his wife and his children.)/dbs