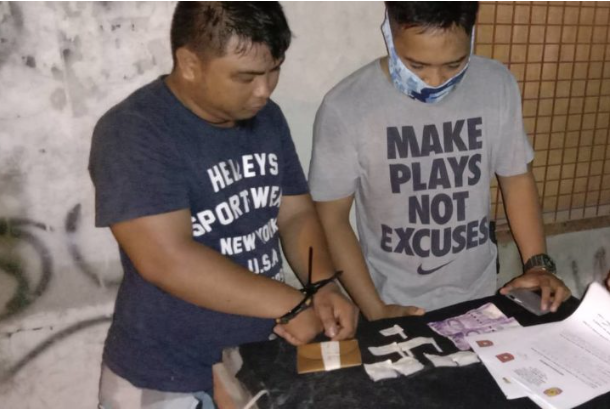 Daniel Benavente, 25, of Duljo-Fatima, Cebu City (left) is arrested after he was caught with P136,000 worth of suspected shabu in Barangay Looc, Mandaue City.| Norman Mendoza

CEBU CITY, Philippines — Another Cebu City resident, whom police described as a high value target, is caught with P136,000 worth of suspected shabu in Mandaue City on Thursday, January 16, 2020.

Daniel Benavente of Barangay Duljo-Fatima, Cebu City, was arrested during a buy-bust operation at 10 p.m. in Barangay Looc, Mandaue City, the second HVT caught in the city this week.

The first one was Dave Kller Natividad of Barangay Calamba, Cebu City, who was arrested on Monday, June 13, 2020, during a buy-bust operation in Barangay Tipolo, Mandaue City.

Natividad was caught with P13.6 million worth of suspected shabu.

Read more: Cop chief: Man caught with P13.6M shabu in Mandaue may be working with pa jailed in Bilibid

Police Major Aldrin Villacampa, Opao Police Station chief, in an interview with CDN Digital that they had being monitoring Benavente after several arrested drug suspects linked him to the illegal drugs business.

Villacampa said that they conducted the buy-bust operation at 10 p.m. and caught Benavente with 20 grams of suspected shabu in 5 plastic packets.

He said that Benavente had been on their drug watchlist and was considered an HVT or high value target, who could dispose 250 grams of suspected shabu in a week.

He said that the drug suspect’s market was the whole of Cebu.

Benavente told police that he got his supply of suspected shabu from a contact, whom he refused to identify and who would just drop the supply to him and would pickup the proceeds when everything would be sold.

Benavente was detained at the Opao Police Station detention cell pending the filing of charges./dbs