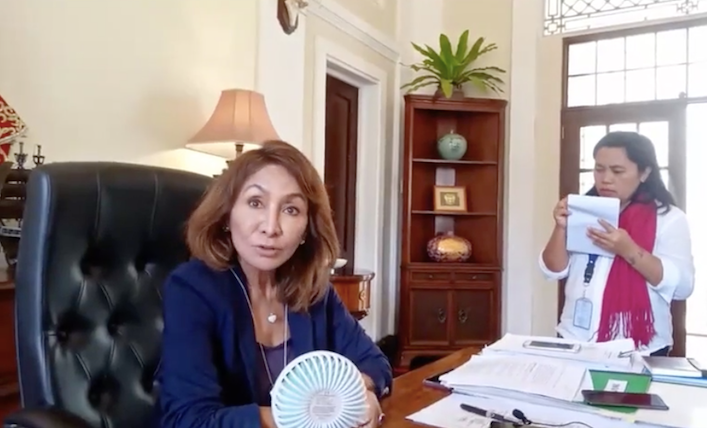 Cebu Governor Gwendolyn Garcia discusses her plans and her views about insurgency and her solution to the problem during a press briefing at the Capitol on March 2, 2020. | Screengrabbed from CDN Digital video

CEBU CITY, Philippines — Cebu Governor Gwendolyn Garcia has offered to give P30,000 for every surrendered firearm from a member of an insurgent group.

Garcia made the offer as she declared anew an “all-out war” against insurgency in the province in the light of a reported encounter between a soldier and a suspected member of the New People’s Army in Bohol province.

Garcia said the “war,” however, would need not entail bloodshed.

The governor said her an all out war would mean for a wholistic approach in ending insurgent movements such as providing better opportunities for the members of the insurgent groups who would surrender back to government.

(An all out war meant a wholistic total approach towards the insurgency problem. Where did this start? Because our brothers from the mountains did not have enough opportunities?)

And part of that approach will be to give them an amount that they can use as capital to live better lives.

She was referring to the P30,000 that the Capitol would give for every firearm surrendered from members of the insurgent groups.

Garcia said the amount that they would receive from the government once they chose to surrender might be used as their capital to live better lives.

The Provincial Social Welfare and Development Office (PSWDO) and the local government units will also take care of their reintegration to society,

“I really believe nga kadaghanan aning naa sa NPA movement, kung tagaan lang silag chance, they would wish to come back to the folds of the law,” Garcia said.

(I really believe that most of those who joined the NPA movement, if they would just be given a chance, they would wish to come back to the folds of the law.)

The governor, however, said that she had yet to look into how much  budget the province could allocate for the reintegration of insurgents to society.

Garcia said she would discuss the measures against insurgency with the police and the military alongside their Cebu Provincial Anti-Drug Abuse Council (CPADAC) meeting this Friday, March 6.

Garcia first declared an “all out war” against insurgencies and terrorism during her previous stint as governor in late 2000s.The province, since 2010, maintains an insurgency-free status./dbs