Teacher, who died in Dalaguete motorcycle crash, leaves tears behind The parents of Marc Ladaran, who died in a motorcycle crash in Dalaguete town on March 5, 2020, grieve as they watch their son inside a coffin at a funeral parlor in Cebu City. | Delta Letigio

CEBU CITY, Philippines — Marc “Makie” Ladaran should have been 33 years old today and celebrated his birthday, if only he had lived two more days.

The teacher of Abellana National High School, who was the tournament manager for dancesport of the Central Visayas Regional Athletic Association (CVIRAA), was on his way home to Cebu City from Dumaguete City when he figured in a fatal accident on March 5, 2020.

Makie had just attended a final technical conference for the CVIRAA in Dumaguete City and was heading home on his motorcycle when he met his demise in Barangay Balud, Dalaguete town in southern Cebu.

He did not make it to his own birthday party because he died from the crash leaving his parents and two brothers mourning his death, along with his friends, fellow teachers, and students. Relatives sprinkle holy water on the coffin of the late Marc “Makie” Ladaran during his Mass Service on March 7, 2020 at his wake at the Columbario de la Sagrada at Imus Road in Cebu City. | Gerard Francisco

Merlie Ladaran, 57, Makie’s mother, could not contain her tears as she spoke to CDN Digital in a March 7, 2020 interview about her son’s death.

She said the pain in her heart was unbearable as she could not accept that the son who had slept in the same room with her for 33 years would no longer be there.

“Sakit kaayo. Birthday unta niya karon. Nagplano siya nga magkuyog ming tanan pero wala na siya kaabot (It is so painful. Today should have been his birthday. He planned for our family to be together but he did not make it),” said Merlie.

She said it was difficult to understand why things happened as her son had many dreams and plans for his life especially for his students in sports.

The death of Makie had been devastating for the family, she said, and his death had left a huge hole in their lives. 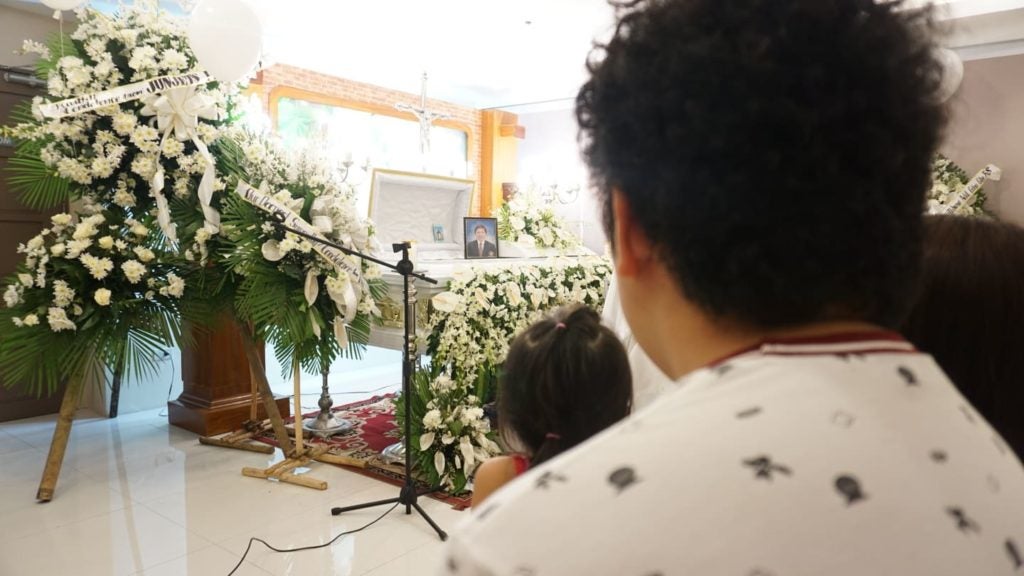 Family, friends, fellow teachers and students attend the March 7, 2020 Mass Service for the late Marc Ladaran in his wake at the Columbario de la Sagrada in a Cebu City funeral chapel. | Gerard Francisco

Makie’s father, Gregorio Jr., said his son was the most caring, loving, forgiving, and helpful of his children.

The middle child of three, Makie lived his life taking care of his parents because his older and younger brothers have families of their own.

The brothers are the joy of Gregorio and Merlie, and then losing one of them is the toughest challenge they have experienced. He took up a degree in Secondary Education majoring in Music, Arts, Physical Education, and Health (MAPEH) at the University of San Jose-Recoletos (USJ-R).

He joined the faculty of the Abellana National High School and began to coach sports teams including chess, dance troupe, sepang takraw, and recently dancesport starting 2009.

The teacher was also entrusted to be the  tournament manager for dancesport of the CVIRAA in 2019. Makie’s father, on the other hand, said his son worked so hard for the students that he would barely spend vacation times with the family in the last 10 years.

“Nya karong birthday niya nagplano siya nga magtapok mi, wala na nuon siya kaabot. (Now on his birthday, he planned a family get together, but he did not make it),” he said.

The father said the family would have to accept the sad fate of Makie and live on despite the pain.

Marc “Makie” Ladaran was known to be a cheerful son, brother, teacher, and friend. In his death, he leaves behind tears of those who loved him in life and who now mourns him in his death. /dbs