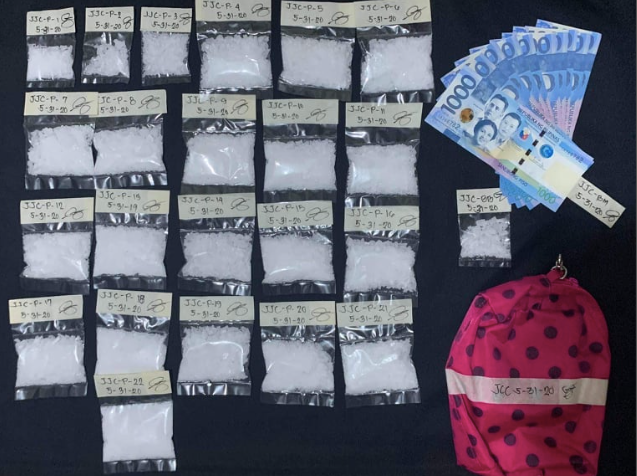 With the arrest of a high value individual on May 31, who was caught with P2.3 million worth of suspected shabu, police are expecting more illegal drug traders to get on with their operations as the city goes into GCQ. | Contributed photo

CEBU CITY, Philippines — Cebu City police assure that there will be no letup in their illegal drug campaign as they expect illegal drug traders to get back on their operations with the city going into general community quarantine (GCQ).

Police Major Randy Caballes,  City Intelligence Branch (CIB) chief of the Cebu City Police Office (CCPO), gave this assurance and assessment of the illegal drug situation in Cebu City after they arrested a high-value individual, who was caught with P2.3 million worth of suspected shabu on Sunday, May 31 or a day before the scheduled GCQ started.

Caballes was referring to the arrest of Ma. Joe-ann Juezan Cabornay during a buy-bust operation in Barangay Labangon on May 31, Cebu City.

He said that Cabornay was already jailed in 2017 and got out in 2019 after acquiring plea bargaining.

Read: Woman, 23, to spend birthday in jail after she was caught with P2.3M shabu

Caballes said that drug traders illegal drug operations were hampered when the city went into enhanced community quarantine (ECQ) because their movements were limited and more policemen were deployed on the streets.

(That is what we are anticipating because during the ECQ time, there were limited movement of people and more policemen were deployed on the streets so they [drug traders] found it difficult to transport their illegal drugs.)

But now with the easing of quarantine restrictions like with more freedom to move from one place to another with the GCQ as compared to the ECQ, Caballes said they were anticipating more drug traders to go back to their illegal drug operations.

Caballes, however, warned these illegal drug traders that despite the easing of restrictions of the GCQ, there would be no letup in their (police) campaign against illegal drugs.

He said they would continue to monitor persons especially those in their illegal drugs watchlist./dbs