CEBU CITY, Philippines — The case of the “missing” chickens in Cebu City is not over yet.

A group of residents from Barangay Sambag I in this city have filed administrative and criminal complaints against responsible city officials and representatives before the Office of the Ombudsman-Visayas over allegations that the chickens, which were donated by a food company to the city last May, were sold in the barangays.

The complaint letter, which was signed by a certain Marco Licinio “Bebot” Flores Gingoyon, claimed that the chickens were sold for P120 apiece to the residents of the barangays.

“We, poor residents of Sitio Ascension, Barangay Sambag I, Cebu City, were among those hapless victims who had fallen prey to these heartless vultures,” the complaint letter reads.

A copy of the complaint letter obtained by CDN Digital shows that it was received by the Ombudsman on Wednesday morning, July 22, 2020. Based on its receive stamps, the letter was also submitted to the Office of the Mayor on July 13. 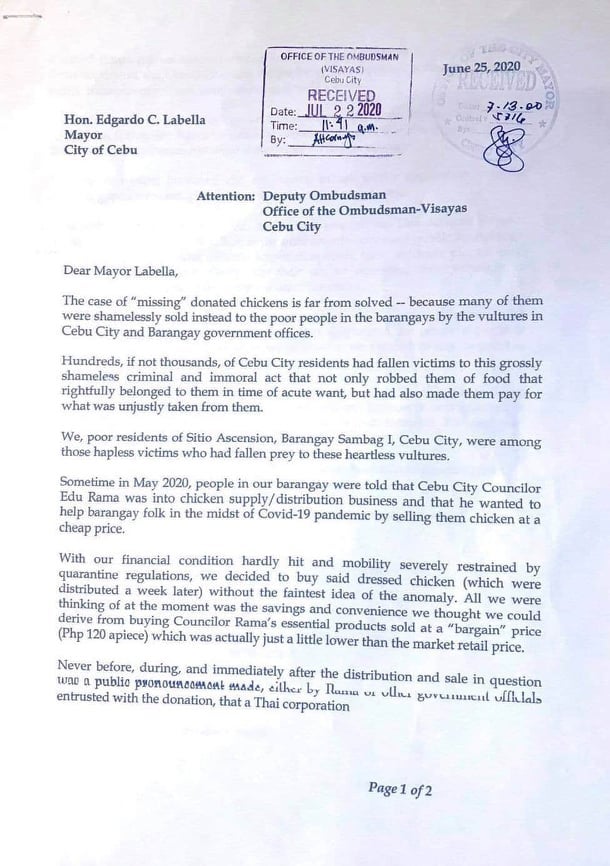 A copy of the complaint letter sent by residents of Sitio Ascension, Barangay Sambag 1 over the alleged sale of donated chickens in the barangays in Cebu City.

The complainants said people in their barangays were told sometime last May that the chickens were sold at a bargain price of P120 each, which they availed of.

Although the complaint did not detail the identity of the persons who were involved in the sale, they said they were told the chickens were from a supposed chicken supply business of Cebu City Councilor Eduardo Rama Jr.

“Sometime in May 2020, people in our barangay were told that Cebu City Councilor Edu Rama was into chicken supply/distribution business and that he wanted to help barangay folk in the midst of the Covid-19 pandemic by selling them chicken at a cheap price,” the complainants claimed.

“With our financial condition hardly hit and mobility severely restrained by community quarantine restrictions, we decided to buy [the] said dressed chicken without the faintest idea of the anomaly,” they added.

Rama, in a message reply to CDN Digital, dismissed the allegations and said the claims are political and libelous.

“The city identified nine barangays and two organizations to give the CP Foods donation to.  This did not include Sambag. Their claims are politically motivated and libelous,” the councilor said.

City Councilor Joy Young initially sought for the liquidation of the alleged 17,000 dressed chickens donated to the city during his privilege speech on June 17.

Young said he received reports that members of the Mayor’s Information and Liaison Office (MILO) were allegedly selling the donated dressed chickens for a profit.

Rama, in his privilege speech a week later or on June 25, responded that the chickens were not lost, but were distributed to the barangays and frontliners.

Rama said the chickens were distributed to nine barangays and frontliners between May 20 to May 25. / dcb

Read Next
Chilean police train dogs to sniff out COVID-19