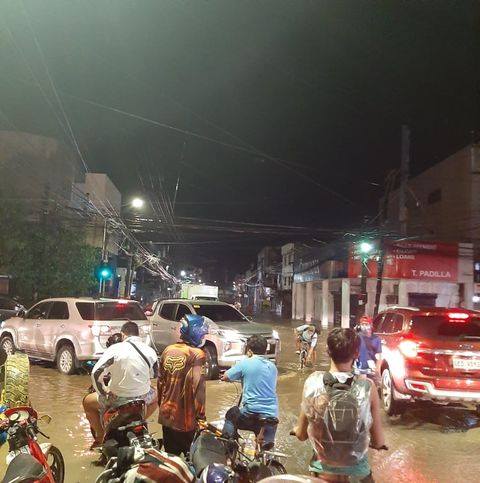 Vehicles slowly drive through the flooded area as motorcycle riders wait for the floodwaters to subside at a portion of the intersection of T. Padilla Street and M.J. Cuenco Avenue in Cebu City after the heavy rains in Metro Cebu on October 13. | Photo courtesy of Netizen Zenon Angelo

South District Representative Rodrigo “Bebot” Abellanosa will be asking for a raise of P1.5 billion for the Department of Public Works and Highways (DPWH) allocation from the 2021 national budget.

In recent statements, Abellanosa complained that the budget of the DPWH for Cebu City did not reflect its contributions to the national coffers.

Following the massive flash floods in different barangays on October 13, 2020, which took the lives of three individuals, the congressman found the need to have more funds to address the drainage and waterway problems of the city.

In his manifestation in the plenary debate for the national budget in Congress on October 14, 2020, Abellanosa said that the general budget of the DPWH in his district was just as much as the allocation for two projects alone in a certain district.

Considering the need for the city to fix its drainage and implement the drainage plans as soon as possible, the additional budget is essential.

“We are asking for an additional budget of around P1.5 billion from DPWH for flood control and mitigation projects for Cebu City South District,” said Abellanosa in a text to the reporters.

Similarly, Cebu City North District Representative Raul Del Mar said the funding from the national government was “minuscule” compared to the extent of the flooding problem of the city.

He said that he had been working on the funds for the flood control projects in the north district, but the problem had overtaken the funds allocated for it.

“Our regular funding allocations are minuscule to handle the big ticket infrastructure project required. So we better update our master drainage and anti-flooding system plan in order to determine how much we need and where to source it,” said Del Mar in a text message to reporters.

It is not yet clear if Del Mar has also sought for a raise in the DPWH budget for the North District because he has not responded to queries sent by CDN Digital at the time of writing.

Mayor Edgardo Labella already said he would look into asking the Congress for help to fund the drainage projects of the city and hasten their completion.

It can be remembered that in 2019 the the City Council considered a P9 billion budget for the implementation that the drainage masterplan that until now has not been realized.

Read Next
Labella to bottled water manufacturers: Put up recycling bins in the city