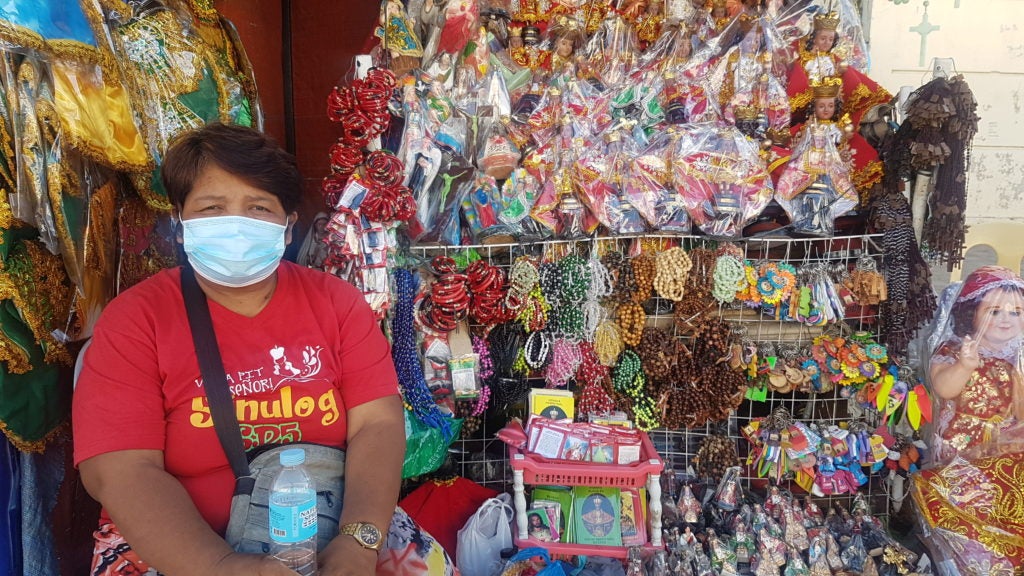 CEBU CITY, Philippines — Alimer Dahoya is a 50-year-old Sto. Niño vendor who has been selling images of the Holy Child for more than 30 years, or since 1989.

Her life has revolved around the Basilica Minore del Sto. Niño and her devotion to Him to keep her family of ten children survive the harsh world.

Despite the meager income of selling church images and items along D. Jakosalem Street over the years, she said her family never grew hungry and four of her children managed to get an education at least at college level.

She also sustained the education of one of her children to get a college degree. She still has six children going to school, including one taking up an Engineering course.

(Be devoted to Sto. Niño because whatever I ask from Him, He will really give. He gave me the strength to survive no matter the hardships in life.)

She believes that it was through the growing devotion of the people to the Sto. Niño that her family never became hungry.

However, the pandemic changed everything. Aside from not getting any income for six months into the Enhanced Community Quarantine, the restrictions of selling at D. Jakosalem Street has taken a toll on Dahoya and other vendors.

Their sales dropped as they were only allowed to sell every other day.

Placing them at the Compania Maritima during the Sinulog season even when the masses were cancelled only worsened their situation.

Dahoya said she can barely make up for her capital of P100,000. When in the past she could sell at least 40 images per day, nowadays, she could not even sell one.

“We hope they (government) will be enlightened and realize our situation here,” she said in Bisaya.

The vendors are expected to stay at the Compania Maritima unitl April 2022 for the Quincentennial Anniversary of the Arrival of Christianity in the country as the Basilica will be one of the key locations for the series of activities.

This means the struggle is expected to continue for Dahoya. But she continues to hope and pray to the Sto. Niño that sales will pick up in the coming days so her family won’t starve.