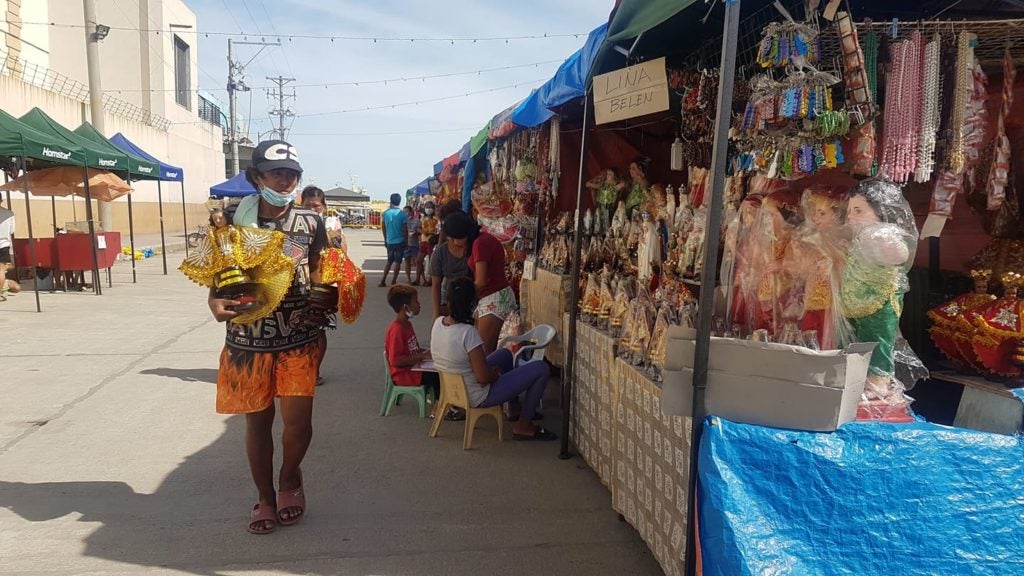 The Sto. Niño vendors are having a hard time selling goods at the Compania Maritima. | Delta Dyrecka Letigio

CEBU CITY, Philippines — Sto. Niño vendors continue to suffer through the pandemic after they have been removed from the vicinity of the Basilica Minore del Sto. Niñor as a measure to prevent crowding.

The vendors have incurred major losses from not being able to sell their goods normally. They said that being too far from the Basilica had hurt their sales.

The lack of devotees passing by the Compania Maritima where at least 20 vendors are currently situated have caused a massive drop in their sales.

On Sinulog season, the vendors could sell up to 40 images per day, but in recent days they could barely sell a single image.

Councilor Philip Zafra, City Council’s chairperson for the Committee on peace and order, said that they were studying when the vendors could return to their usual spots.

But more people are still flocking to the basilica for the Fiesta Señor, the vendors may have to endure the difficult situation they are in.

And this may even continue until the Quincentennial Celebration of the arrival of Christianity in the country on April 2021.

Zafra said they would want the vendors to be in a place where they could profit, but the quarantine restrictions especially the regulations against crowding must be prioritized.

The original plan was to keep the vendors at the old Compania Maritima until April 2021, but the councilor said there might be a way to get them back closer to the basilica sooner.

(We have a committee, a multiagency task force, leading towards the 500 years. One of the topics that we will discuss will be the vendors. We will look into their situation.)

As of now, the city government is helping devotees to locate the vendors through information dissemination and directing customers to them at Compania Maritima.

The councilor assured the vendors that their situation was being considered by the city government in the plans for the 500th anniversary this April.

But while the city government is still considering what action to take, the vendors are barely able to make ends meet.

Alimer Dahoya, a 50-year-old vendor, said she could not even afford the tuition of her son taking up Civil Engineering.

She said that if they would continue to stay at the Compania Maritima, there would come a time when her family not be able to eat anymore./dbs

Read Next
Gov’t should not be pressured by China’s donation of COVID-19 vaccine, says Pangilinan