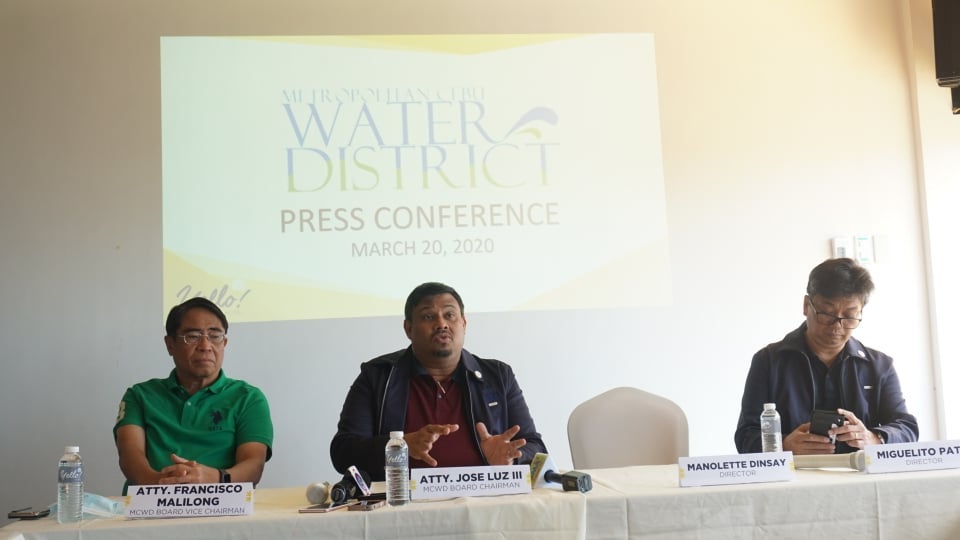 CEBU CITY, Philippines — The controversy surrounding the Metropolitan Cebu Water District (MCWD) board of directors is far from over after a Cebu City court has issued a temporary restraining order (TRO) on the termination of the directors in 2019.

The request for a TRO was filed by terminated directors, Ralph Sevilla, Cecilia Adlawan, and August Pe, shortly after they were terminated in October 2019, but the court only released its decision on March 15, 2021.

READ: Court issues TRO against Labella’s termination of MCWD board

A hearing for the motion for reconsideration filed by the current board of directors chaired by Lawyer Jose Daluz III will be held on Thursday, March 18, 2021.

Until then, the board stands in limbo as technically the current board is ordered not to function, yet there is little to no time for the reinstated board to actually convene.

To discuss the state of the water utility, Daluz and the current board members met on Wednesday, March 17, 2021, to tackle how to deal with the court order.

For now, they have decided to respect the order of the court, momentarily stop functioning, and wait for the motion for reconsideration to be heard.

“We filed a motion for reconsideration to the court. That will be heard tomorrow. Hopefully, the court will rule in our favor because I think the issuance of the TOR is wrong,” said Daluz.

The chairman said that a TRO is usually issued for urgent matters. Yet it has already been 15 months since they were appointed by Mayor Labella and the appointment was approved by the Local Water Utility Administration (LWUA).

In this case, Daluz believes there is no reason or need to issue a TRO because if the terminated board members wish to appeal their termination and take to the court this grievance, it can be done so without a TRO.

He added that they will have to question the necessity for the TRO when the termination that has happened more than a year ago can hardly be called “urgent.”

Still, with the motion for reconsideration filed, they expect this to take precedence over the presentation of evidence on why the preliminary injunction should be granted. Another hearing is set on March 25, 2021, for the defendants to show cause on why it should not be granted.

After all, the new board has been installed and has functioned for the last few months.

With the new board in limbo, the most affected in this would be the projects lined for MCWD. Daluz said they are set to sign a contract for a desalination plant that should provide an additional water source to the city.

However, Daluz said this “legal battle” for the board of director seats will not affect the day-to-day management of the MCWD as the board is only a policy-making body.

The water utility’s operations management is yet to release a statement on the issue but has designated their legal department to address any queries regarding the previous board’s reinstatement.

Since the management of the MCWD is not affected by the board battle, the consumers can expect services to continue as is. /rcg