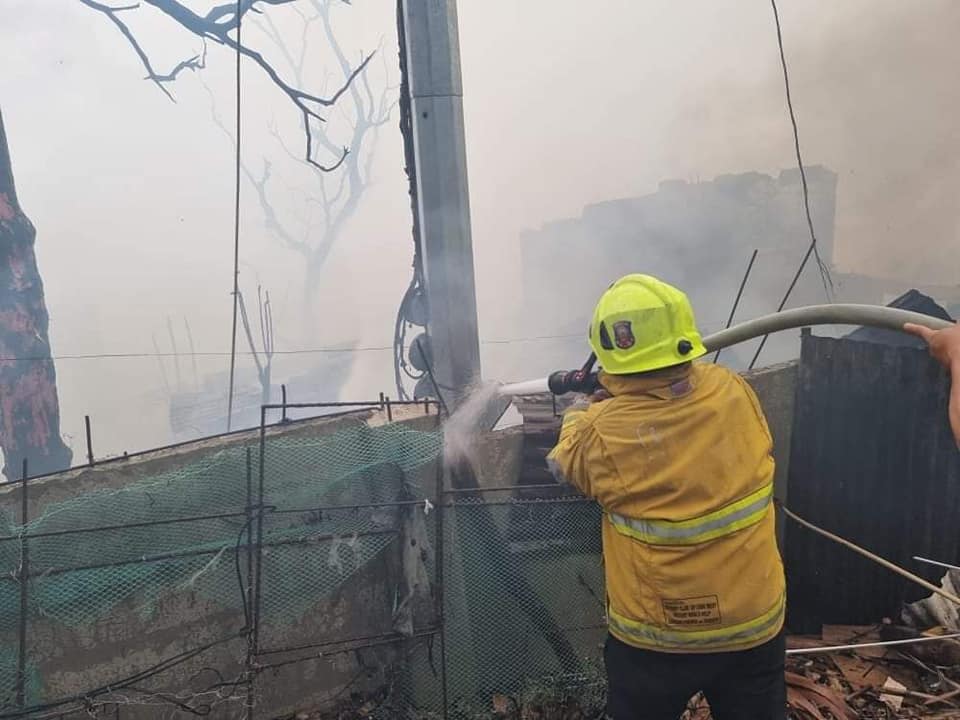 A firefighter trains his water hose to a house razed by the morning fire in Upper Tabok, Barangay Tabok in Mandaue City. | Photo courtesy of Mandaue CDRRMO

MANDAUE CITY, Philippines — Fire investigators are checking the possibility that the fire that hit Upper Tabok in Barangay Tabok, Mandaue City on Sunday, April 18, was due to an electrical overload.

Senior Fire Officer 2 (SFO2) Edgar Vergara of the Mandaue City Fire Station, said in a phone interview that this was because they found out that the area had several boarding houses with no permits, with several electrical extensions and this could have caused the electrical overload that could have possibly started the fire.

He, however, said that this was only one of the reports that they were verifying as they continued with their investigation to determine what really caused the fire in Barangay Tabok.

Look: Scenes of the fire in Barangay Tabok in Mandaue

He said they were also verifying reports about the possibility of a transformer exploding and could have caused the fire.

However, Vergara said that they could not get specimens of the burned wires or of the transformer that could have helped them in their investigation because the residents might have already took the burnt wires and could have already sold it to junkshops.

He said that they were relying now on witnesses accounts of the fire.

Meanwhile, the Mandaue City government will give the 333 fire victims cash assistance.

Dr. Maricel Yu, head of the city’s Social Welfare and Services (CSWS), said they were fast tracking and verifying the number of affected families so that they could make a special report and submit it to Mayor Jonas Cortes.

Lawyer Lizer Malate, head of the city’s Emergency Operations Center, said the mayor was expected to be back on April 20 or on Tuesday after he went into isolation when he earlier tested positive for the coronavirus disease 2019 (COVID-19).

Yu said so far only 36 were homeowners and most of which were renters.

Yu said the area was a private lot and many might not return there since most of the affected individualds were only lodgers and renters.

Yu said they had already given disaster kits worth P2,500 to the affected families.

Read Next
‘No plan B’ if pork prices not lowered amid tariff cut, hike in imports, solons told