Boy, 3, two others hurt in road accident in Argao 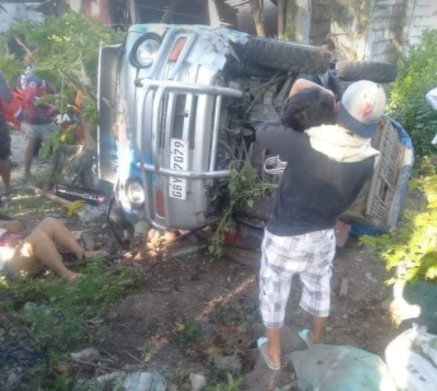 Three persons were hurt including a three-year-old boy after the driver lost control of the Multicab causing it to fall on its side in Barangay Binlod, Argao town in sourthern Cebu at late afternoon today, May 22. | Photo by Argao MDRRMO

CEBU CITY, Philippines — Three persons including a 3-year-old boy were injured after the Multicab they were riding on figured in a road accident at past 4 p.m today, May 22, along N. Bacalso Highway, Barangay Binlod, Argao town in southern Cebu.

Ramil Omboy, base control operator of Argao town’s Municipal Disaster Risk Reduction and Management Office (MDRRMO), confirmed that the accident happened after the driver lost control of the vehicle causing it to fall on its side at the side of the road.

According to the Argao MDRRMO in its Facebook page, that the woman injured her right arm, the girl felt pain on her hips, while the boy hurt his left knee.

The MDRRMO said that the victims were from Barangay Tunghaan, Minglanilla town in southern Cebu.