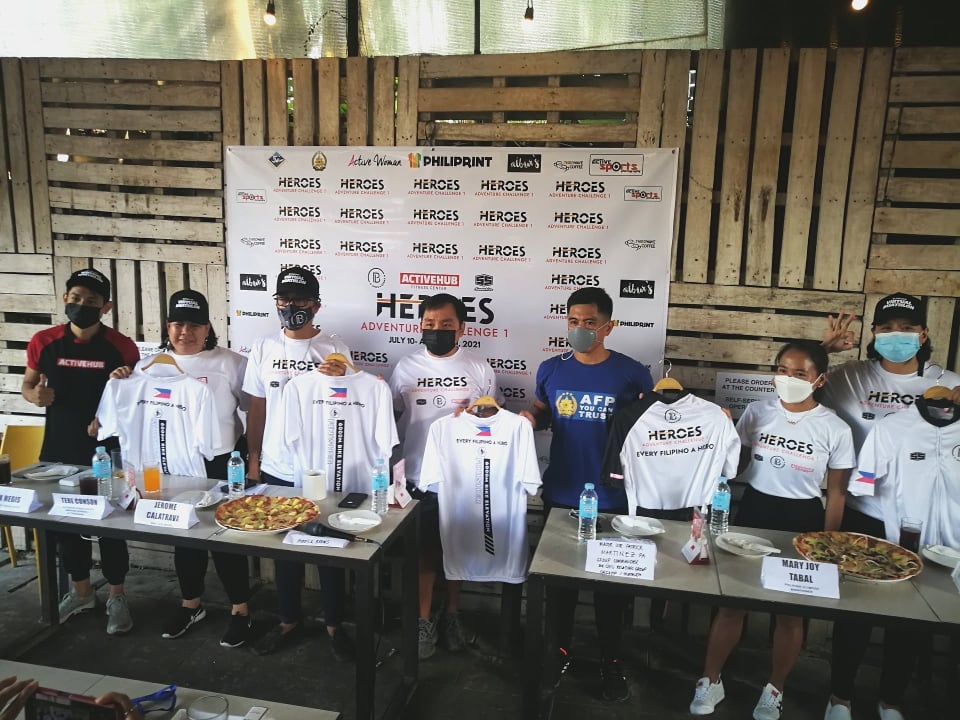 Organizers of the upcoming Heroes Adventure Challenge pose with the finishers’ shirt and jersey during the launching at the Alburs Burger, Pizza and Grill today, May 31, 2021. | Photo by Glendale Rosal

CEBU CITY Philippines — Cebuano sports buff have something to look forward to in the coming months as several Cebu-based groups joined hands to organize the first “Heroes Adventure Challenge”, a virtual multi-sporting event slated on July 10 to August 10, 2021.

The run, bike and elevation bike non-competitive sporting event is organized by Active Hub Fitness Center, Bikes and Brews, and the 3rd Civil Relations Group of the Armed Forces of the Philippines (AFP).

The event’s official launching was held earlier today, May 31, 2021 at the Alburs Burger, Pizza and Grill.

No less than Cebuana Olympian Mary Joy Tabal will join the run portion of the first of three legs scheduled this year.

Leg one is dubbed as the “Hope of the Nation” which intends to raise funds for the scholarship program of the childred affected by the armed conflict between the AFP and the NPA in Guihulngan City in Negros Oriental.

The first leg will feature three categories, the bike, run, and elevation bike which features long and grueling distances perfect for competitive athletes and sports buffs to welcome themselves back into action after a year of inactivity due to the COVID-19 pandemic.

“We created many virtual events before to adapt with the new normal,” said Rex Regis of Active Hub Fitness Center during the press conference. “So, here we are with the Heroes Adventure Challenge.”

“I’m very excited to participate in the running category. Joining this event is not just for ourselves, but also we’re running for our heroes. It’s one way to give back to them,” said Tabal.

Also, Tabal shared some helpful tips for those who want to conquer the gruelling distances. She said that each participant, newbie or experienced, would have an equal chance to accomplish the distances considering the entire virtual sporting event would last a month.

“You can run a particular distance a day until you can cover the whole distance before the deadline. You can walk or jog and you are not obliged to run the whole distance. It is a great way to challenge yourself to get fit and achieve something for yourself,” said Tabal who will join the elite 150k distance.

Joining them during the press conference were Bikes and Brews co-owners Jerome Calatrava and Renault Lao. Also, Tere Conson of Active Hub and Smarties Apparel and the group commander of the AFP’s 3rd Civil Relations Group Major Joe Patrick Martinez joined the launching.

According to Martinez, they are very grateful with the AFP for being chosen as partners of the virtual sporting event which is also in-line with the month-long National Heroes Day Celebration on August 30, 2021.

The proceeds of the event will be used for a scholarship program the organizers will be having for six deserving students who are affected in the armed conflict between the government forces and the New People’s Army (NPA) in Guihulngan City, Negros Oriental.

Included in their scholarship program according to Martinez are children of the four slain individuals in Barangay Trinidad in Guihulngan City on May 14, 2021.

“As what you remembered what happened in May 14. Yung parents na pinatay sa harap ng kanilang mga anak sa Guihulngan City. Those children were orphaned. These children are achievers, they have 44 medals and 78 ribbons. It will really touch you emotionally seeing those children na wala nang mga magulang,” said Martinez.

(As what you remembered, what happened in May 14, the parents were killed infront of their children in Guihulngan City. Those children were orphaned. These children are achievers. They have 44 medals and 78 ribbons. It will really touch you emotionally seeing those children having no more parents.)

“For us in the military. This is not what we want for all of us Filipinos. We are fighting a thing from the past, a barbaric act sa panahon ngayon (in this present time). That is why your soldiers are engaging in a more diplomatic activities such as this one,” Martinez added.

For more details about the registration and mechanics of this upcoming virtual sporting event, visit its official Facebook group page, Heroes Adventure Challenge.

Online arnis tourney in the works