Back in series, Clippers try to draw even with Suns 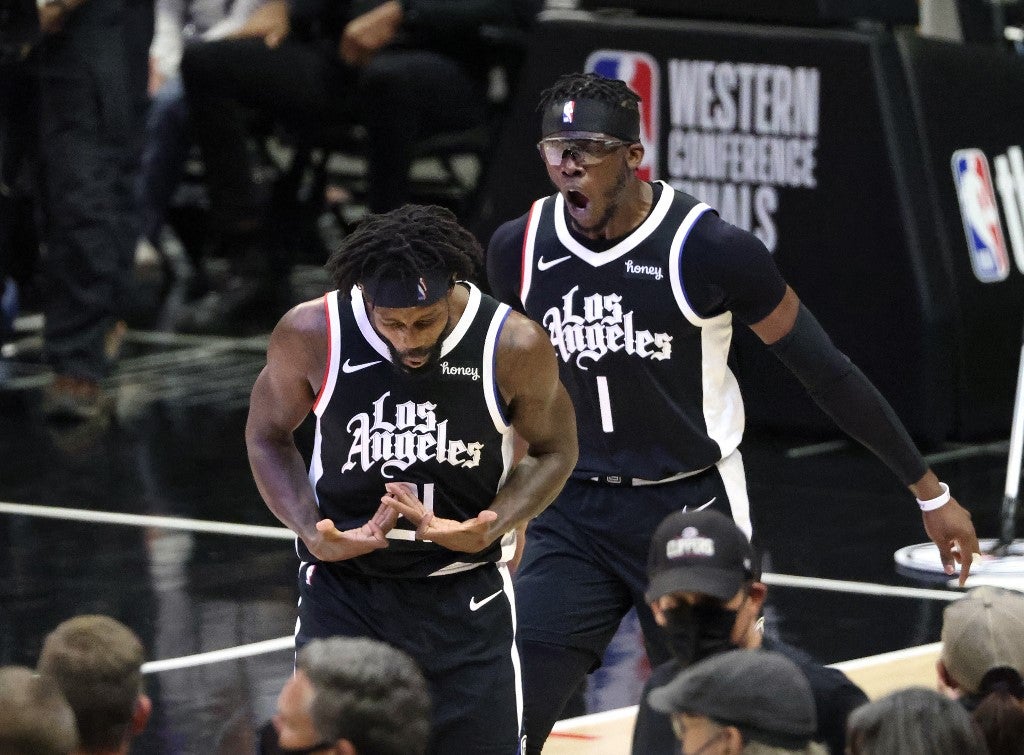 Patrick Beverley #21 of the LA Clippers celebrates a three point basket with Reggie Jackson #1 during the second half of game three of the Western Conference Finals against the Phoenix Suns at Staples Center on June 24, 2021 in Los Angeles, California. NOTE TO USER: User expressly acknowledges and agrees that, by downloading and or using this photograph, User is consenting to the terms and conditions of the Getty Images License Agreement. Harry How/Getty Images/AFP (Photo by Harry How / GETTY IMAGES NORTH AMERICA / Getty Images via AFP)

After roaring back to life in the Western Conference finals without superstar Kawhi Leonard, the Los Angeles Clippers can level the series at home in Game 4 on Saturday night against the Phoenix Suns.

Leonard missed his third straight game of the current series Thursday and fifth consecutive in the playoffs due to a sprained knee, with Los Angeles going 3-2 in that stretch and extending a season that appeared doomed without him. Leonard was ruled out Friday for Game 4.

The Clippers won Game 3 at home 106-92 and while they still trail 2-1 in the series, they move forward knowing they held the Suns to 38.9-percent shooting while holding Phoenix star Devin Booker to 15 points. The Clippers dominated the second half on the way to victory.

Adding to their optimism is that while they don’t have a key piece to their puzzle in Leonard, they stopped the Suns even on a night when Phoenix star Chris Paul returned from COVID-19 protocol. Paul had 15 points with 12 assists but combined with Booker to shoot 10 of 40 from the field.

Also key: The Clippers didn’t let their heartbreaking defeat at Phoenix in Game 2 — when the Suns’ Deandre Ayton scored on an alley-oop in the final second — permeate into Game 3.

“You know, we were on the plane; we talked about it,” Clippers star Paul George said. “We hashed it out. And immediately we got ready for Game 3. Simple as that. We had to move on. I thought we did a great job of moving on. I moved on. I know I have to be better. I have to be better.”

George had 26 points in Game 2 but missed two late free throws that could have given L.A. a three-point advantage with 8.0 seconds remaining preceding Ayton’s game-winning basket.

In Game 3, George responded by leading the Clippers with 27 points, 15 rebounds and eight assists.

Reggie Jackson continued to deliver for the Clippers with 23 points in Game 3. He averaged 10.7 points per game in the regular season but has scored 17.6 in the playoffs — averaging 23.0 in the five games Leonard has been out.

The Clippers have fallen behind 0-2 in all three series this postseason. They won Game 3 every time and have won Game 4 in each of the first two series.

“This team is resilient,” Jackson said. “We always believed. We never give in. We never say die.”

Just like George vowed to be better in Game 3, Paul is saying the same for the Suns in Game 4.

“They just outplayed us, you know what I mean?” Paul said. “We didn’t make shots. You could tell they had a lot more energy. I got to be better. I shot terrible. I’ve got to pick up the pace. We’ll be ready for Game 4.”

In addition to Paul working his way back into the flow, Booker was adjusting to playing with a plastic face guard after sustaining a broken nose following a collision with Clippers guard Patrick Beverley in Game 2.

Booker was 5 of 21 from the field and 1 of 7 from 3-point range. He had five assists with five rebounds after posting a triple-double in Game 1.

“It’s fine, honestly,” Booker said of the mask. “I honestly don’t really see it or it doesn’t affect me.”

More bothersome to the Suns seemed to be playing without guard Cameron Payne, who was effective in the first two games of the series as Paul’s replacement but played just four minutes of Game 3 because of a left ankle injury.

“Obviously, he’s been a spark for us,” Booker said. “He’s made a lot happen for us when he’s been out there. I just hope he’s in good health.”