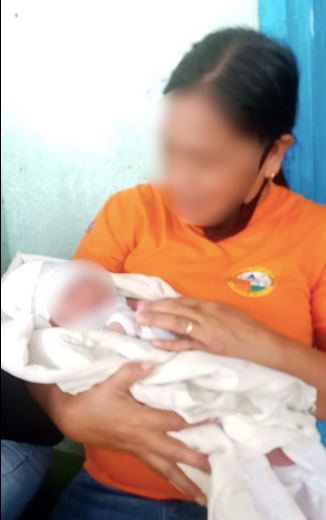 CEBU CITY, Philippines — Parents, who could not provide for their newborn babies, should seek the Department of Social Welfare and Development’s help instead of throwing them away or abandoning them.

Concepcion Solera, social worker of Department of Social Welfare and Development in Central Visayas (DSWD-7),  made this appeal after a newborn baby girl was found on a grassy area in Barangay Dumlog in Talisay City on Wednesday afternoon, July 7.

(Babies are blessings from God and there are many couples, who don’t have children. If they could not take of the baby, then they should not throw them away because they can go to the DSWD, which has facilities for these babies.)

John Kerwin Castillo, emergency responder of Dumlog Barangay Health Center, said that they believe that the baby girl found on the grassy lot was a newborn baby because she still had her umbilical cord when they found her.

Castillo said that they cut the baby’s umbilical cord only when they reached the Barangay Health Center.

Rosalie Villaver, Dumlog Barangay Nutrition Scholar, said that the baby weighed around 3.9 kilos and had a height of around 49.5 centimeters.

As of now, the baby has already been turned over to the Women and Children Development Center in Barangay Dumlog after she was swabbed as part of her medical intervention.

Meanwhile, the DSWD-7 has also received queries about how to adopt a newly found babies.

This after the netizens learned about the baby girl was found in a grassy lot in Barangay Dumlog.

Solera clarified that adopting a newly found baby was not encouraged because adoption would follow a process.

The social worker said that a child should be issued a certification that he or she would be legally available for adoption before he or she could be adopted.

(We would inform the public that one cannot adopt right away a newly found baby.)

(Babies, who can be adopted, are those who are legally available for adoption.)

(We have a certification for that and the law that is Republic Act 9523. The baby will be issued a certificate from the DSWD secretary that he or she is legally available for adoption.)

For now, she said there was a need to locate the biological parents of the baby because they were not discounting the possibility that the mother would later on claim her.

Solera, the social worker, assured that the baby would undergo medical intervention before she would be turned over to a residential facility or to a foster care community.

Meanwhile, Talisay City policemen are trying to locate and identify the parents of the baby.

Pat Acibron of Talisay City Women and Children’s Protection Desk (WCPD) said that they were looking at CCTV footage that could possibly help them identify the person or persons, who left the baby.

She said that they were checking two black vans that were parked in the area before the baby was found.

However, she said they could not link the black vans to the baby found in the area because no person was seen getting out of the vehicles.

She also cited a woman, who was in the area, but they also could not link her to the baby being there.

For now, Acidron said they were continuing with their investigation.

According to Rosemarie Salazar, DSWD-7 protective services division chief, that a case could be filed against the mother of the baby for abandoning her.

Salazar said that this would fall under Republic Act 7610 or the Special Protection of Children Against Abuse, Exploitaation and Discrimination Act.

But, she said, this would depend on the outcome of the assessment and the possible reason of the mother because there would be times in crisis that she would be forced to do what she did.

She also said that in Cebu alone they had not yet filed a case against mothers, who had taken back their babies.

She, however, said that the filing of a case against the mother would also depend on the court and on what case should be filed against her.

Read Next
No more plates? No problem, lechon skin is it!