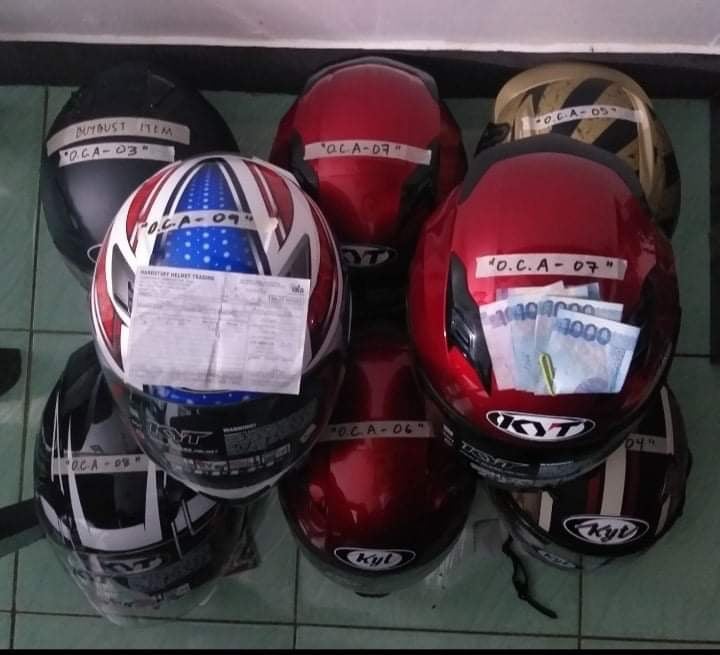 These are some of the counterfeit motorcycle helmets that CIDG-7 personnel seized during their entrapment operations conducted from July 16 to 17 in different stores located in Talisay City, Cebu City, and Mandaue City. | Photo from CIDG-7

CEBU CITY, Philippines — Investigators from the Criminal Investigation and Detection Group in Central Visayas (CIDG-7) are coordinating with Cebu City’s Business Permit and Licensing Office after arrested individuals refused to cooperate and show them the business permits of the stores that were caught selling counterfeit motorcycle helmets and shock absorbers.

Police Colonel Ireneo Dalogdog, CIDG-7 chief, said they needed the business permits to verify the legitimacy of their operations.

However, the arrested employees, who are now detained at the CIDG-7 detention facility, refused to cooperate with them.  These employees also refused to show them copies of their official receipts with their company’s registered business names.

Refusal to cooperate in an ongoing police investigation could result to arrest, worst imprisonment, Dalogdog said.

Dalogdog also warned owners of stores selling fake helmets and other motorcycle accessories of charges for the violation of the Intellectual Property Code.

If proven guilty, violators may be imprisoned for one to three years and be asked to pay a fine ranging from 50,000 to 150,000 for the first offense.

Imprisonment of three years to six years with a fine ranging from 150,000 to 500,000 await second time offenders.

Last July 16 and 17, CIDG-7 raided six stores located in the cities of Mandaue, Cebu and Talisay for allegedly selling fake helmets and shock absorbers with fake KYT, YSS and seals and arrested six employees whom they chanced upon during their simultaneous operations.

Complaints for the violation of the Intellectual Property Code were already filed against the arrested employees from three Cebu City stores.  Two of them were from the Mandaue City stores while one was arrested while manning the Talisay City store.

Dalogdog said these stores get products from one supplier, who also provides supplies to other similar businesses in Central Visayas.

But he begged off from releasing the names of the six stores and their supplier so as not to jeopardize their ongoing investigation.

And while they wait for Cebu City BPLO’s response, Dalogdog said they cannot prevent the six stores from resuming their daily operations.

Dalogdog said that as soon as they are able to secure the documents that they need, they will proceed with the filing of complaints against the store owners and hopefully their supplier.

During their entrapment operation, CIDG-7 confiscated fake motorcycle helmets and shock absorbers with fake seals worth at least P463,200.

These operations were made after a representative of Moto Industriya Trading that is based in Metro Manila filed a complaint against the unauthorized display and sales of fake YSS and KYT products some Metro Cebu stores.

Moto Industriya Trading is the sole authorized distributor for KYT and YSS products.

Businessman says ‘big personality’ is behind his arrest

Read Next
Beyond survival