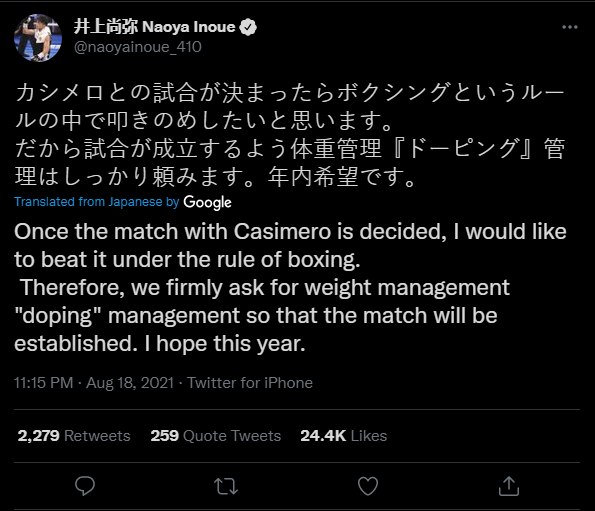 In his August 18 tweet, Inoue, the unbeaten Japanese boxer, the reigning World Boxing Association (WBA) and International Boxing Federation (IBF) world bantamweight king, said he would be willing to fight Casimero if the latter would follow proper anti-doping testing.

“Once the match with Casimero is decided, I would like to beat it under the rule of boxing. Therefore, we firmly ask for weight management “doping” management so that the match will be established. I hope this year,” he said in his tweet that was translated to English from Japanese.

In his previous tweet, Inoue said to have organize a match, fanning more speculations that the much-anticipated fight between the two world champions is looming.

After defeating Cuban world champion Guillermo Rigondeaux via a lackluster split decision on August 15 in California, Casimero said his next target would be between Inoue or fellow Filipino and four-division world champion Nonito “Filipino Flash” Donaire Jr.

Also, Casimero has been taunting Inoue on his social media since last year. He accused Inoue of avoiding to fight him.

The alleged doping has been one of the main reasons Donaire Jr. pulled out from his world title unification bout versus Casimero.

He accused Casimero of not submitting accurate paperwork on his Voluntary Anti-Doping Association (VADA). Also, Donaire decided not to push through with his fight with Casimero because of the latter’s disrespectful comments towards his wife and family.

However, Casimero’s camp insisted that they were regularly being tested by VADA and returned negative.

Either way, Casimero’s fight with Inoue or Donaire will surely draw most boxing fans’ interest. The 32-year-old Casimero, the pride of Ormoc City, a three-division world champion, sports a record of 31 wins with 21 knockouts and 4 losses.

Inoue is undefeated at 21 wins with 18 knockouts. He previously defended both his world title straps by knocking out unheralded Filipino Michael Dasmariñas. Inoue is also best known to defeat Donaire in 2019.