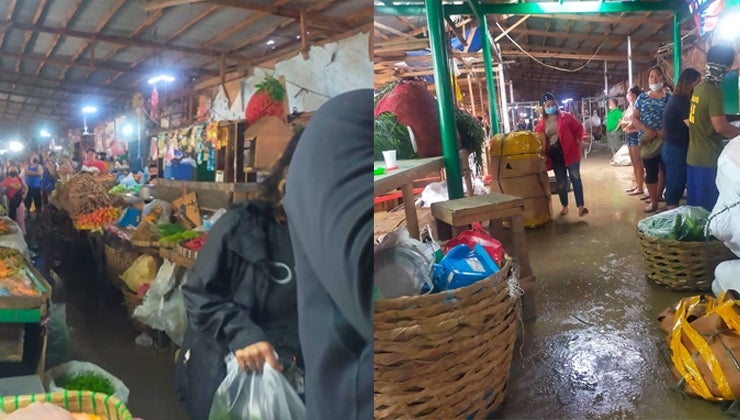 CEBU CITY, Philippines — The vendors of Carbon Market Unit III, Lavo Seaside, took time off their stalls on Friday noon, October 15, 2021, to show their support for the ongoing renovations of their Bagsakan Facility.

The Bagsakan Facility is being renovated by Megawide Construction Corp., as part of the Joint Venture Agreement (JVA), which they signed with the city government over the modernization of the entire Carbon Market.

There had been a division among vendors as to whether the Bagsakan Facility should be renovated or not, but at least 60 vendors have already agreed to it and a portion of Unit III has been renovated already.

Yet a few stall vendors have been vocal in their dissent to the project appearing in radio programs and even in front of the Cebu City Council saying that their stalls were demolished and they were removed “inhumanely” from their spots.

This had been repeatedly denied by the Market Operations Division (MOD) as they explained that all vendors will be temporarily transferred in tents until the renovation is completed, after which they will be returned to their spot in the new facility.

As of now, three vendors in Lavo Seaside have opposed the clearing, which once again threatened to put a halt to the renovations once more.

Pastor Zosimo Potot, the president of the Lavo Seaside Vendors Association, said that among 183 members of their organization, only six expressed dissent to the project.

He said that it is unfair that all stall vendors should suffer through mud and a leaking roof just because six of them refused to get their stalls cleared.

Potot said that for years, the Unit III market has been flooded during rains, the mud would get stuck underneath the stalls, and the leaking rain made it hard for both vendors and shoppers to get comfortable.

When Megawide renovated a portion of the Bagsakan, vendors saw a huge advantage as the market floor was raised, cemented, and proper drainage was installed.

The roof was made of durable materials and the stalls were equally divided making it easier for consumers to move about.

The group staged the picket rally in hopes of bringing their support across and convince the “doubting” vendors to change their minds and allow the renovations to push through.

MOD Head Irvin Cabales already said that they will only continue with the consent of each stall vendor.

In previous statements, the dissenting vendors said the clearing operations conducted by the MOD were inhumane and unjustified as they were never told the reason for the operations.

They also feared losing their stalls even if the MOD already assured them that as long as they have a Certificate of Recognition, they will have a stall to sell in.     /rcg