Wife accused of killing husband: I am innocent 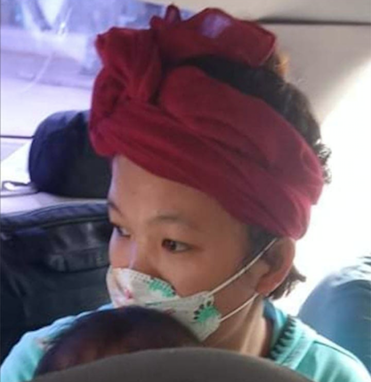 Geraldine Potot is arrested inside a car along Queen City Cemetery in Cebu City at past 9 a.m. on Sunday, November 7, 2021. | Paul Lauro

CEBU CITY, Philippines — Geraldine Potot, who is among the seven accused in the killing of her husband, Romneck Potot, in July 2020 in Tabogon town, says all of them are innocent of the crime.

“All I can say regarding this matter is we are all innocent,” Geraldine said when asked about the crime she is allegedly involved in together with her parents and relatives who were earlier arrested via virtue of a warrant of arrest for murder on October 28, 2021.

Geraldine said her love for her departed husband was “dearly” and that Romneck was “well-loved” by her family.

On November 7, 2021, Geraldine was arrested for her pending warrant of arrest for Parricide.

READ: Wife, who is wanted for killing her hubby in Tabogon, nabbed in Cebu City

Geraldine also said she was not hiding from law enforcers, insisting she was only making sure of the safety of her two-year-old son, who was with her when she was arrested.

“As a mother, I need to make sure about the safety and security of my son,” she said.

READ: NBI-7’s message to woman wanted for parricide: ‘You can run, but you can’t hide”

Geraldine and the other accused were pointed as culprits in the murder of Romneck, who is a cook, by a seven-year-old witness who is the nephew of the former.

Geraldine hopes that her nephew will help clear their names.

“He is used as a star witness [in] this case but I am hoping that this boy is also the key for the truth to be revealed,” she said.

Battle now at the court

Agent Arnel Pura of the National Bureau of Investigation in Central Visayas (NBI-7), for his part, said that they have already done their part and that it is now up to the court to determine whose evidence is stronger.

Pura said that they are hopeful that within the day, the court will issue the commitment order just like of those six individuals who were first arrested. These individuals are currently detained at the Medellin District Jail.

“We did our job already. That’s it. The only remaining part would be to testify if we will be called by the court to testify in connection with the investigation we conducted,” Pura added.