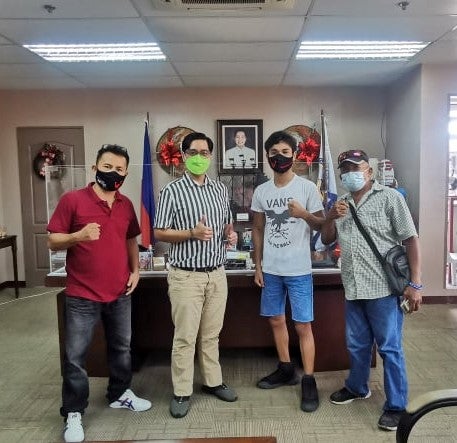 CEBU CITY, Philippines— The Villamor Brothers Gym will introduce its first professional boxer in Christian Balunan, who will make his professional debut on December 10, 2021 in the undercard of “Kumong Bol-anon 2” in Dauis gymnasium, Bohol.

The 19-year-old boxer from Barangay Jugan, Consolacion town, northern Cebu is the first boxer Edito “ALA” Villamor produced after the famed ALA Boxing Gym closed its doors in 2020.

He will face veteran journeyman Roga Libres who holds a professional record of three wins with 16 losses. The Boholano Libres is also 10 years older than Balunan.

Despite the disparity in terms of experience, Villamor is very excited to introduce his young ward in the pro scene.

The Villamor Brothers Gym, owned by Villamor himself, opened last year amidst the pandemic and since then he has trained dozens of young boys who want to become professional boxers.

For Villamor, it is his way to continue the 35-year legacy of ALA Boxing Gym.

(I am excited and happy. They are not the only ones excited but I am more excited for them. Actually, he has a lot of fellow boxers that I believe are ready, but it is just too difficult to promote them all.)

Regarding this kid that will fight first, we the whole team, is looking forward for the best fight. That is why we are supporting them.)

Balunan told CDN Digital that he has been fighting for two years already in the amateur division. He has 106 amateur bout victories with 16 defeats.

He is also a gold medalist in both the Cebu Provincial meet and the Philippine Sports Commission (PSC) Batang Pinoy.

In total, Balunan said that he won 16 gold medals and two silvers in his amateur boxing career.

(I am not pressured and not nervous. I am, however, excited to compete because I believe in myself and I have practiced hard with my trainer Edito ALA Villamor. I cannot say that I will win in this fight but I will do my best to win.)

According to Villamor, his ultimate goal is to duplicate his success as a trainer and matchmaker when he was still with ALA Boxing Gym which is to produce a world champion.

He said that he had several other prospects in Reymart Tagacanao, Vicente Unidos and Jofel Barcoma who would soon debut in pro boxing.

(My ultimate goal in boxing is to become a world champion like my idol Manny Pacquiao and I can help my family be free from a difficult live.)

Balunan said that it had been a great honor for him to be trained by Villamor whom he described as the best boxing trainer in the Philippines.

He said he was also grateful to his trainer, who did not just teach him boxing but also mentored him to have a good character in and out of the ring.