In his report to the City Council during the regular session on Wednesday, January 12, 2022, Rama revealed the long-term strategy he is proposing for the city’s disaster resilience following the grave devastation of Odette to the city last December 16, 2021.

Rama said that in order to prevent the cutting of power during supertyphoons, the city needs to have public utilities underground, to have its own powerplant that can supply at least 200 megawatts and at most 400 megawatts.

He also proposes a waste-to-energy facility and a “robust” inter-barangay communication system for disaster response. 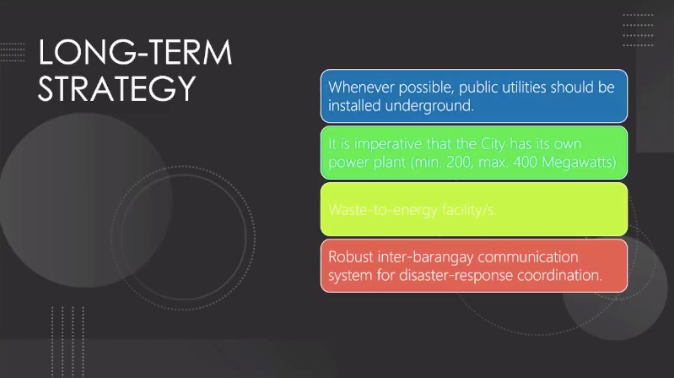 Rama told the council that these long-term plans would prevent the interrupted power and communication lines that the city experienced as a direct aftermath of the typhoon.

The mayor said that the city must improve its facilities to be a globally competitive and disaster-resilient highly urbanized city.

Rama also reported to the council the points the convergence group made up of both government and public sector has made in response to the recent events since Typhoon Odette.

He said that the barangays, themselves, need to be resilient, and businesses must open up to jumpstart the economy.

The city government will be asking the Commission on Higher Education and the Department of Education to postpone and extend the deadline of academic requirements for students.

The convergence also pointed out the need for equality in the provision of relief goods, the need to have a proper list for cash assistance, relief goods, and agricultural aid.

Among other concerns were utilities, garbage collection, the current COVID-19 situation, and the recommendation of home isolation.

The mayor is asking the City Council to provide their inputs on these issues within a week’s time for the executive department to consider and even implement.

“You have asked me to present here in the Council with little time. Now, I ask you to give me your inputs within a week. Help us,” said the mayor.

The council members also assured the mayor that they will be helping the executive department formulate the immediate solutions to the concerns of the convergence.  /rcg