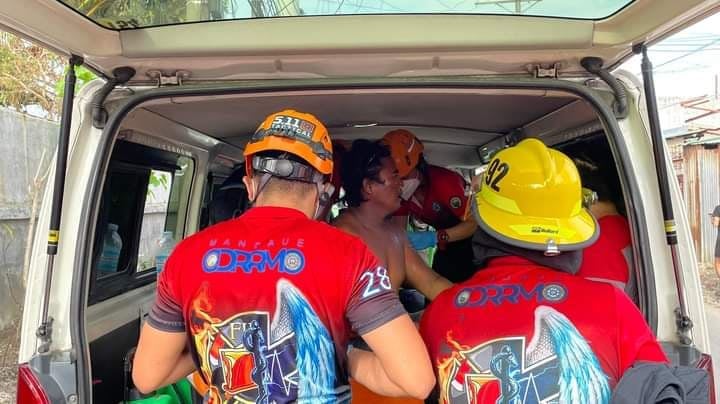 The Mandaue CDRRMO personnel give first aid to a lineman, who was electrocuted while working on a main electric line in Barangay Maguikay, Mandaue City. | Photo courtesy of Mandaue PIO

MANDAUE CITY, Philippines — A 36-year-old lineman is recuperating at the hospital after he suffered second degree burns when he was electrocuted while repairing power lines in Sitio Sudlon, Barangay Maguikay, Mandaue City on Thursday morning, January 13, 2022.

Angit Geo Ranni Saberon, a lineman of the Tovegra Electric Services, was rushed to the hospital after he was rescued when he got an electric shock when the transformer exploded as he and his coworkers were working on the main line of electricity in the area.

Ybañez said Saberon sustained second degree burns, but he was conscious when rescued.

He said the Saberon was immediately brought to Vicente Sotto Medical Memorial Center for treatment.

Ybañez is also asking the public to be more understanding as to the linemen and electric companies are risking their lives, working overtime and doing their best to restore power lines that have been toppled by super typhoon Odette.

Ybanez said as of January 12, the Visayan Electric Co. based on its report had already energized 54 percent of Mandaue City.

Visayan Electric: More than 200K households reenergized as of Jan. 9

Read Next
Mandaue on Alert Level 3 status: No lockdown, no need to appeal IATF ruling