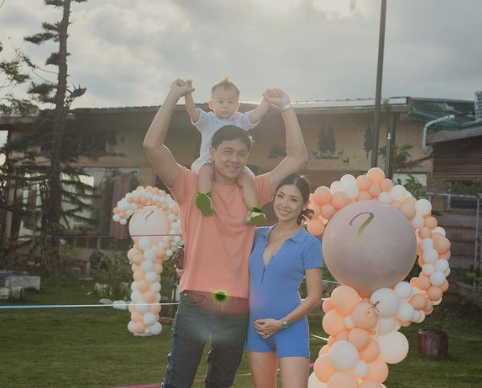 CEBU, Philippines—The Skyfam will have another baby boy.

Cebuano celebrity couple Kryz Uy-Young and Slater Young will have a baby boy for their second child.

In a vlog premiered on Thursday, January 13, 2022, Uy-Young shared the behind-the-scenes and the gender reveal party.

“Our gender reveal is a month delayed, but sooo worth the wait. Initially, I wasn’t really in the mood to celebrate or have a big party because of the covid climate and all the weird things happening around us. My vibe was kind of like… “nahhh people probably have other things to do anyway.” When I told my family that we would probably just be doing a simple balloon pop or cake cutting, Jack/Deedoe, my sister, totally panicked and said NO WAY! If Scottie got himself a really cool gender reveal [https://bit.ly/3A3xcNX] then baby #2 deserved one too!

She took it upon herself to plan and coordinate the whole thing and… BOY DID SHE DELIVER! This has to be one of the most unique, funny, and surprising gender reveal surprises ever! Thank you so much to Deedoe, my brother Dicky, his kids, Slater sister Sheryl and everyone else who made this possible. We are floored by the effort and love you have shown our family. Hope you guys enjoy our little celebration! Finally, we can all say… it’s a…… (!!!),” she wrote as a caption to her vlog on Youtube.

Kryz and Slater’s siblings put up a wrestling-themed gender reveal for their second baby.

A boy and a girl wrestler had a wrestling match inside a ring, outside their home.

The winner for each round gets to pop each of the four balloons placed at the four corners of the ring.

One of these balloons contain the answer to the everyone’s question: Is it a girl or a boy?

The boy wrestler won the last round and popped the last balloon releasing a shower of blue-colored confetti.

Last November 2021, the Cebuana influencer announced on her Youtube vlog that she is pregnant with their second child.

The youngest Young turns one!