How a senior high student became a promising cyclist in Cebu 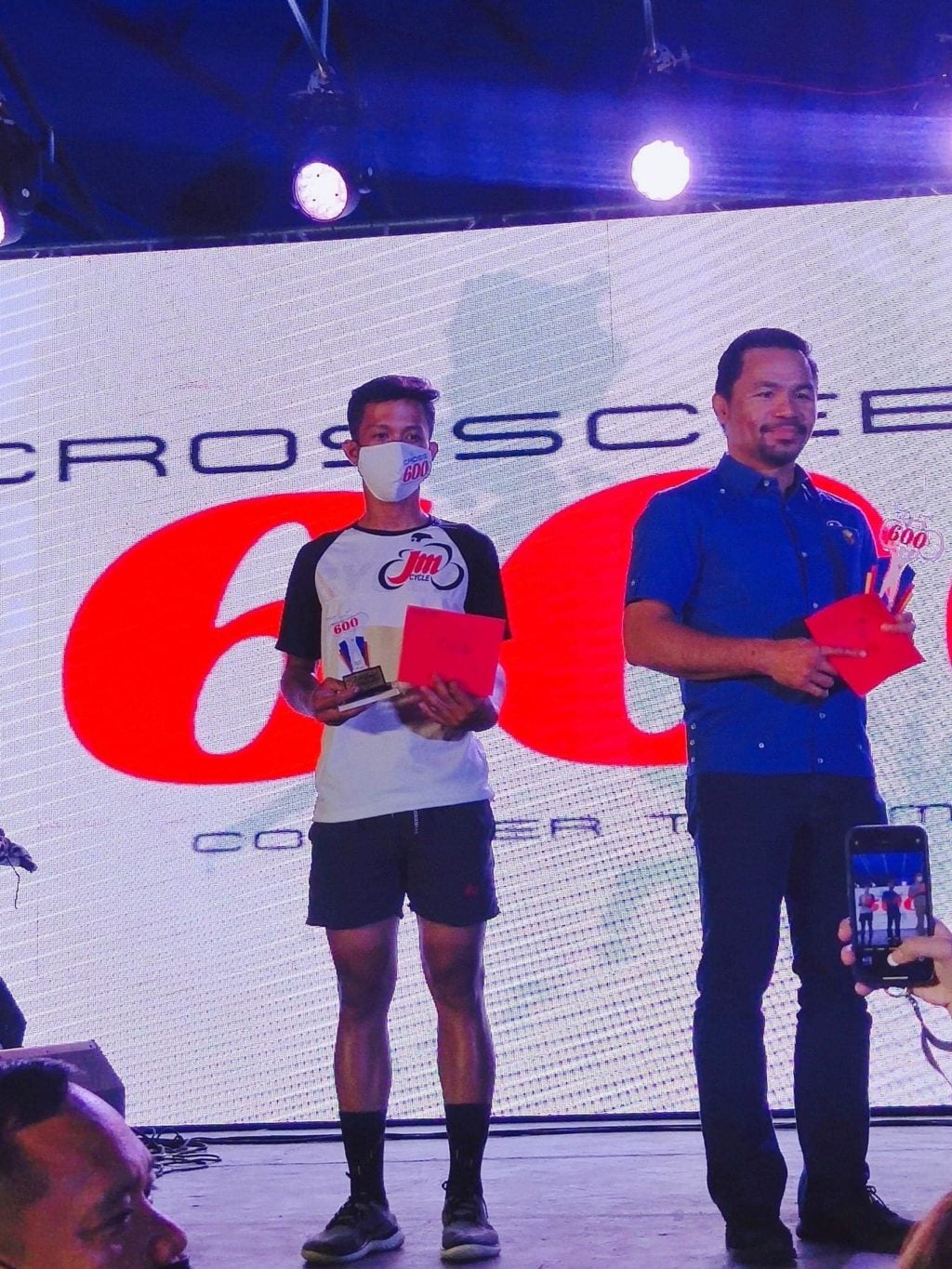 Kylle Taboada (left) holds the plaque during the awarding ceremonies of the Cross Cebu 600 in November. Presidential aspirant and Senator Manny Pacquiao, who sponsored the major race, graced the event. | Photo courtesy of JBM Clickers

CEBU CITY, Philippines — From borrowing bikes to becoming one of Cebu’s most promising young cyclists, Kylle Taboada has proven that dreaming big and working hard pays off.

The 19-year-old son of a construction worker showcased his huge potential in the grueling sport of cycling after placing third overall in the elite category in one of the biggest races in the country last year, the Cross Cebu 600 last November.

It is more remarkable that it was Taboada’s first long-distance race. He also went up against some of the finest cyclists in the Visayas and Mindanao region.

(With my experience, I am so happy because I was allowed to compete in a big event. I was not expecting that I could enter the podium. It was tiring but I continue to fight so that my sponsors, my family and my teammates would be happy. I put my trust in the God and then he did not ignore my struggles.)

He said that he used to borrow spare bicycles from his friends two years ago when he became interested in cycling.

He has long been dreaming of having a bicycle, but he is also aware that his parents can’t afford to buy him one; he saved up money while borrowing his friends’ spare bicycles to join them in long rides.

(At first, it took me quite a while to like biking. My family did not like it because they could not afford it. So that is why I saved money and I starting biking when I was 17.)

(At first, I would just borrow a bike so that I can bike. That is why I dreamed that it would be better if I can buy a bike.)

(My dream came true and I was able to own my bike. I also dreamed that I would not only own a bike but I would become stronger and become competitive so that my family would be proud of me.)

(That is why I took long rides and joined in small competitions. Until I reached Cross Cebu 600 then I got into the three overall in the elite category. I am so grateful to God for giving me the grace and the strength.)

His experience during the Cross Cebu 600 wasn’t short of challenges along the way.

Taboada said that he had an accident in the last stage. He got injured, and his bicycle was badly damaged. However, he didn’t give up; instead, he returned to his old ways of borrowing bikes. He borrowed one of his team’s spare bikes to finish the race.

Remarkably, Taboada was able to catch up and finish third overall among 35 other contenders.

On top of that, he also placed second overall in the ‘best sprinter’ category.

(I met an accident in the last stage in the Barili area. That is why I borrowed another bike. I caught up with the group of riders in the Dumanjug area. The frame of my bike was broken when I met an accident. I thanked God that I was safe and had no broken bones.)

(I fought hard in the last stage and I did not care if I met an accident or I was left behind because for me this was for my sponsors and my family.)

Like all aspiring cyclists, Taboada dreamed of becoming part of the national team and vie someday in national and international races.

He also thanked the generous people who sponsored him during the race and believed in his potential.

(I am grateful for my sponsors. There was even someone, who approached me and wanted to also sponsor me, I thank him in advance. I am also grateful for the neverending support of JM Cycle for choosing me as one of the riders and to my family. I hope that God will provide me with more strength in my coming races.)

(I am not wasting your support for me. Thank you for your help and God bless you all.)

He said that he was planning to join more races this year at local or national levels.

With that in mind, Taboada has been training rigorously this year to prepare for these races.