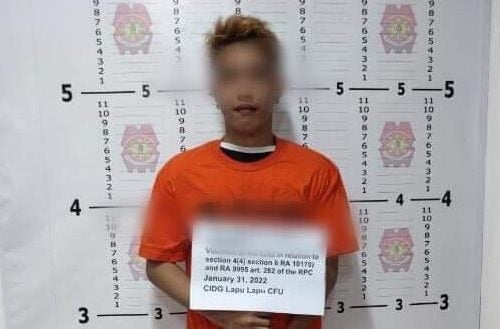 The 19-year-old man suspect is now facing charges for violation of the Violence Against Women and their Children Act in relation to cybercrime, and the Anti-Voyeurism Act.| Photo courtesy of CIDG-7

LAPU-LAPU CITY, Philippines — The Criminal Investigation Detection Group (CIDG) Lapu-Lapu City field unit has already filed a case against the 19-year-old man who blackmailed a 21-year-old woman into having sex with him.

Police Captain Nigel Sanoy, OIC of CIDG Lapu-Lapu City field unit, said that the suspect, Paul Vincent Valiente, a resident of Consolacion town, will be facing charges in violation of Violence Against Women and their Children in relation to cybercrime, and the Anti-Voyeurism Act.

Valiente was apprehended in an entrapment operation on Monday, January 31, 2022, after he threatened to share online some nude photos of the woman if she did not have sex with him.

Sanoy said Valiente has used dummy accounts and pretended to be a foreigner a year ago.

Valiente convinced the victim to send nude photos of her in exchange for an amount of money.

But the suspect did not pay the victim that’s why the woman blocked him in the Facebook (FB) Messenger.

On Monday, Sanoy said that the victim received a message from the suspect using another FB account.

The suspect threatened the victim that he would share the nude photos if she will not have sex with him.

Sanoy, however, thanked the victim for having the courage the report the incident to their office, which resulted in the suspect’s apprehension inside a restaurant in VM Patalinghug Avenue in Lapu-Lapu City.

Sanoy also urged those who were victimized by Valiente to show up so that the CIDG can assist them in filing separate charges against the suspect.

He also reminded other women not to immediately trust anyone that they would meet on social media, especially if it involves any request of lewd acts.       /rcg