Despite the rain, 114 houses burn down; over 800 people lose homes 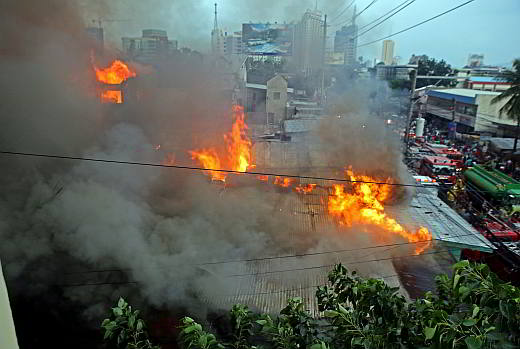 The fire was the second to hit the congested neighborhood since May 2012. (CDN PHOTO/LITO TECSON)

Wooden houses and those made of light materials were the first to burn down in the area behind the barangay hall.

A total of 206 families lost their homes in three sitios of Sta. Cruz, Abellana and Santo Niño.
There were no initial reports of fatalities.

He asked the permission of the principal of the Barangay Luz Elementary School to allow dislocated families to spend the night in the premises, but they have to transfer to the gym in the day to allow students to use the classrooms.

Traffic enforcers closed off part of Governor Cuenco Avenue between two flyovers near Ayala and Salinas Drive to cordon off the area for firetrucks to navigate.

Cebu City Fire Marshal Rogelio Bongabong said the fire was tapped at 4:24 p.m. and placed under control after 25 minutes.

Bongabong said the fire started in a house owned by Mario Villaflor in sitio Abellana, a few meters from the barangay hall.

He estimated that 80 houses of light materials were destroyed in less than an hour despite the heavy rain.

Residents gave several accounts of what caused the fire including an untended cooking fire, electrical misuse and children playing with matches, but Bongabong said fire investigators will still have to verify the information.

Celso Quibo-Quibo, 79, was teary-eyed when Cebu Daily News found him watching his house in flames. Two years ago, his house burned down on the same spot.

After the May 11, 2012 fire, he had promised himself that he would guard the house well and protect it from fire.

Yesterday afternoon, Quibo-quibo had stepped out to buy charcoal for cooking and was at the street corner when he heard people shouting “Sunog”. (Fire)

(I’m angry at whoever started the fire. I wasn’t able to save anything, not even the clothes of my grandchildren.)

He wanted to rush into the house but firemen were blocking his way. He was disheartened as well over the loss of four religious images in the fire.

He said the icons of San Pedro Calungsod, Señor Sto. Nino, Our Lady of Manaog and St. Benedict were given to him by wealthy customers who appreciated his service.

A total of 114 houses were ruined, affecting 206 families or 829 individuals, according to the initial count of social workers.

Cebu City Councilor Ma. Nida Cabrera said she would ask the council to declare barangay Luz in a state of calamity.

Acting barangay Barrio Luz Captain Jerome Pagador said neighbors pointed to the Villaflor household as the origin of the fire and talked of seeing children there playing with matches.

(Barangay captain Ryan Tante was out of town.)

Pagador said the barangay council would convene to declare a state of calamaity in Luz to hasten the release of emergency funds.

He asked kindhearted donors who want to help to bring donations directly to the barangay hall. He said residents would need food, mats, water and clothing. 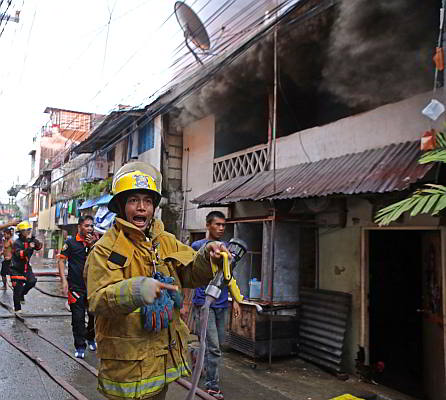 A fireman shouts an order to increase water pressure so he can spray more water on houses aflame in barangay Luz, Cebu City. (CDN PHOTO/LITO TECSON)

Lack of access roads to interior portions of the barangay posed a familiar problem.

When fire struck last year in four sitios of Sto. Ninio, Lubi, Abellana and City Central, fire trucks were unable to enter Sto. Niño, where the fire started, because of narrow passageways.

After the fire, City Hall started reblocking the zone to correct this but residents and barangay officials wanted only partial changes done so the new roads were not as wide.

Vice Mayor Labella noticed the same problem yesterday. He said reblocking would be done as soon as possible.

He also assured families that they can return to the fire site to rebuild their homes.

Bongabong, the fire chief, agreed that reblocking was needed because the area was congested with houses squeezed close together with no access in case of an emergency.

Read Next
Perils of public service