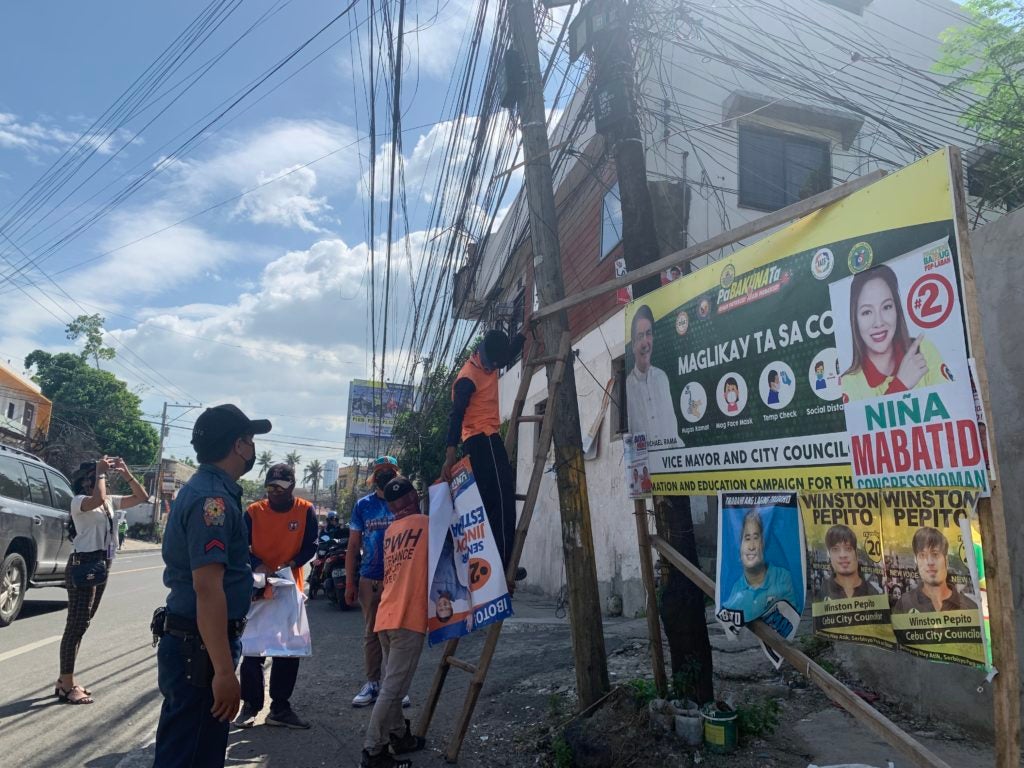 Personnel from the Commission on Elections in Cebu City together with personnel from other agencies conducted Oplan Baklas in Tuesday, April 19, 2022. CDN Digital photo | Pegeen Maisie Sararaña

CEBU CITY, Philippines — Two candidates for mayor in Cebu City were asked to explain the display of their tarpaulins on government structures.

Marilou Paredes, in-charge of the Commission on Elections (Comelec) office in the city’s south district, said they found tarpaulins of reelectionist mayor Michal Rama of Barug-PDP Laban that were on display at the Tisa Barangay Hall.

Campaign materials for mayor candidate Margot Osmena of the Bando Osmena Pundok Kauswagan (BO-PK) were also hung in a portion of the barangay hall in Guadalupe.

Paredes said they already had the tarpaulins removed during the official start of their Oplan Baklas on Tuesday afternoon, April 19.

Written warnings were also issued to require the two candidates to explain the display of their tarpaulins on government structures.

Sanctions specified under the Omnibus Election Code may be imposed if they do not heed the Comelec’s warning against the use campaign materials that are much bigger than the allowed sizes and its display in display in unauthorized areas.

Paredes said campaign materials should only be displayed on common poster areas that Comelec has identified in each of the barangays.

The display of campaign materials outside of the designated  common poster area and its display on government structures, trees and electric poles among others are considered as election offenses.

Paredes said she is already anticipating that both Rama and Osmeña would deny any hand on the display of their tarpaulins at the barangay hall.  Still, she will have to warn the two candidates.