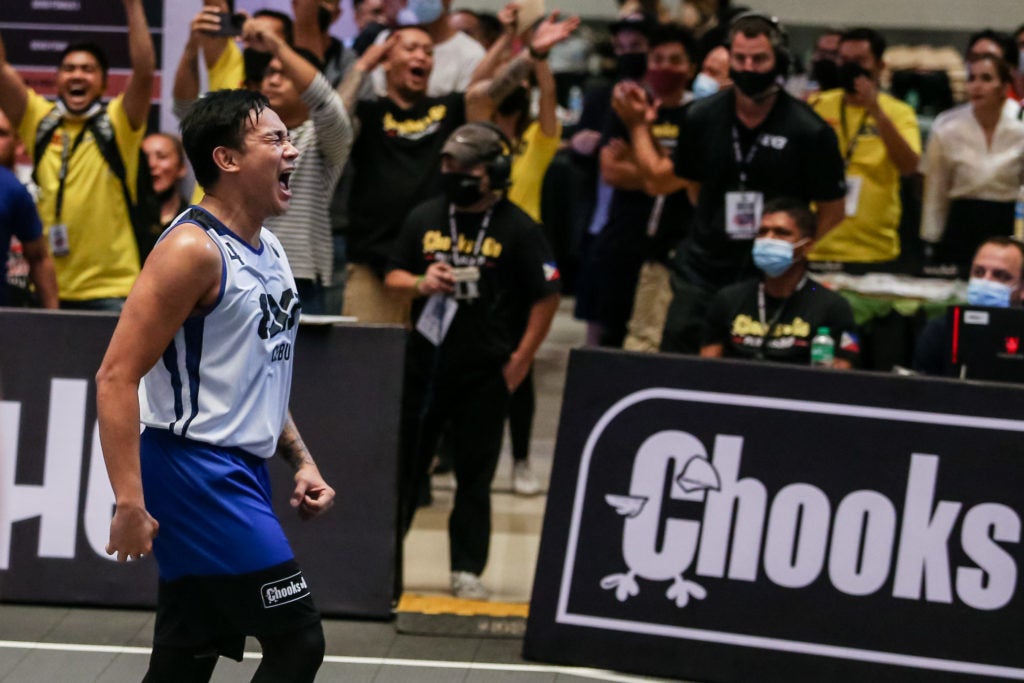 Mac Tallo lets out a yell after scoring a game-winning basket in the Chooks-to-Go 2022 FIBA 3×3 World Tour Manila Masters. | Photo from Chooks Pilipinas

CEBU CITY, Philippines — The Philippines is now ranked No. 18 in the world FIBA 3×3 rankings in the men’s division after its successful hosting of the Chooks-to-Go 2022 FIBA 3×3 World Tour Manila Masters last weekend.

The consistent participation of the Philippines in the Chooks-to-Go Pilipinas-backed FIBA 3×3 tournament was not left unnoticed by FIBA and rewarded the country with its much-deserved global points.

The Philippines’ ascension into the top 20 in world rankings is crucial as the cutoff for qualification in both the Paris Olympics and the Olympic Qualifying Tournament is just 18 months away.

“We already know the formula for us to reach the Olympic qualifying tournament having done so during the last Olympic cycle,” said Chooks-to-Go president Ronald Mascariñas.

“Maintaining our rank will be relatively easy. The goal now is to turn our players into world-class athletes. Hosting and participating bring in points but winning FIBA 3×3 tournaments will bring maximum points.”

The Philippines has a total of 794,057 points. The biggest points the Philippines earned were 247,158 after its successful hosting of the Manila Masters which catapulted the country from the No. 27 to No. 18 in the latest FIBA 3×3 world rankings.

The Philippines is the No. 2-ranked team in Asia behind Mongolia while Japan is ranked third.

In addition, Chooks-to-Go Pilipinas’ 3×3 teams in Cebu Chooks and Manila Chooks have also competed in a series of level eight FIBA 3×3 tournaments earlier this year.

In April, the Philippines also hosted another FIBA 3×3 tournament, the Asia Pacific Super Quest which earned the country an additional 80,675 points

In contrast, if the Philippines would host seven legs of a level four domestic FIBA 3×3 league, it will only earn 35,000 points.

The international stints and hosting of Chooks-to-Go Pilipinas tournaments proved to be beneficial for the Philippines.

Mac Tallo is now ranked No. 72 in the world

Despite falling short last weekend during the Manila Masters, Cebuano guard Mac Tallo retained his No. 1 spot as the top Filipino 3×3 player. The flashy playmaker is now ranked No. 72 in the world.

It’s a historic feat for Tallo and the Philippines as he is the highest-ranked Filipino in the FIBA 3×3 ever, eclipsing Joshua Munzon’s No. 92 spot in 2019.