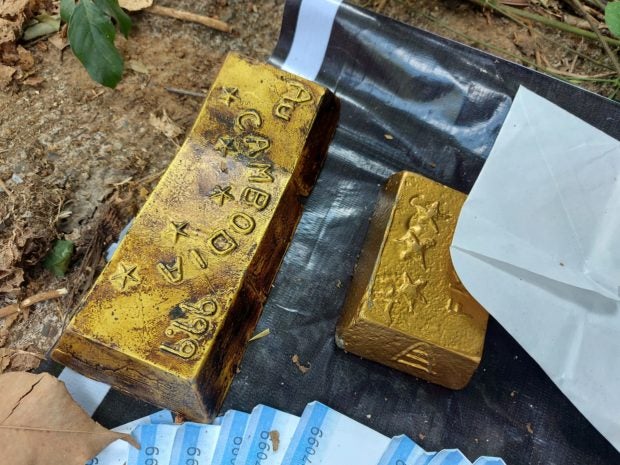 The fake gold bars that the suspects tried to sell to police operatives. | Photo courtesy of MENZIE MONTES

Taken from the suspects were two gold bars that police said were counterfeit, three cellular phones, a genuine 1,000-peso bill, and a bundle of bogus bills and pieces of paper.

Authorities identified the suspects as Rey Naranjo, 58, of Barangay Indahag, this city; “Junalie,” 58, from Tagoloan, Misamis Oriental; “Jerson,” 28, from Malitbog, Bukidnon, and Jimwel, 33, from Sumilao, Bukidnon.

Lt. Col. Joepet Paglinawan, CMFC commander, said the complainant, named by police only as Mitchel, from Opol town in Misamis Oriental, sought their help after he was allegedly defrauded of P500,000 by the suspects.

The first meet-up between Mitchel and the suspects happened this April.

The victim’s complaint prompted the CMFC to set up an entrapment operation using the information they had gathered from Mitchel and other sources, said Maj. Ericson Sabanal of the CMFC.

Sabanal, the leader of the arresting team, said the suspects’ modus operandi was to show real gold coins to the prospective buyers first, and if victims are convinced, they will then try to sell them gold bars.

For this transaction, Sabanal said, the suspects allegedly offered to sell two gold bars, which they claimed are worth P15 million, for only P1.8 million.

The suspects are said to be members of the Ganghaan Landless Association in Tagoloan and known as sellers of fake gold bars operating in some parts of Misamis Oriental, including Cagayan de Oro, and Bukidnon.

Sabanal said the police have been monitoring the suspects for two weeks prior to the entrapment operation.

“To avoid being arrested, the suspects chose the area for a meet-up. That’s why we had a hard time capturing them,” he said.

In order to convince a prospective client that what they were selling was authentic, the suspects would scratch the gold coins that they brought during the first meeting and would show the prospective buyer photos of the gold bars on their cell phone.

Identification cards that were confiscated from Naranjo certified him as a supposed member of both the Philippine National Police Regional Intelligence Group in Northern Mindanao and the Moro National Liberation Front.

The arresting team also confiscated three cellular phones, which contained the text messages between the suspects and CMFC, from the perpetrators.

Sabanal said the suspects will be sued for syndicated estafa.

In an interview, Naranjo said he did not know that the gold bars were fake but admitted that the gold coins that they showed to buyers, which were his, were authentic.

“The gold coins were real. I own them as part of my collection,” he said.

Naranjo said he was into mining and went into gold trading hoping to earn more without toiling in the gold mine.