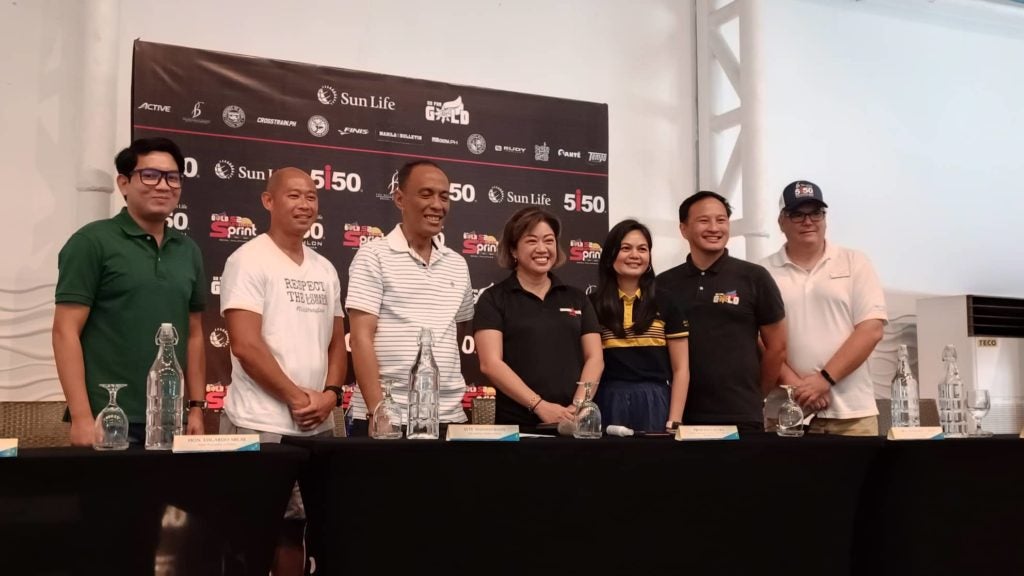 PANGLAO ISLAND, BOHOL — For the first time in five years, triathlon will return to the pristine beaches of Panglao Island in Bohol as the Sunlife 5150 & Go For Gold Sprint triathlon fires off tomorrow, Sunday, July 10, 2022, at the Bellevue Hotel and Resort, here.

A total of 620 triathletes from 23 countries will strut their wares in tomorrow’s race organized by Sunrise Events, Sunlife, and Go For Gold.

Tomorrow’s event not only highlights the return of sports in Bohol after COVID-19 but also marks the first triathlon race happening on the island after five years.

The last time, Bohol, Panglao Island, in particular, hosted a triathlon race was in 2017, which featured the same race, but under a different co-presenter.

“After five years, ngayon lang kami nakabalik in the region. This is the first 5150 race in Bohol after five years and after the Covid-19 pandemic happened,” said Sunrise Events Inc. general manager Princess Galura during the press conference at the race expo held at the Bellevue Resort’s pavilion.

She was joined by Carla Gonzales-Chong of Sunlife Philippines, and Jeremy Go, Go for Gold founder.

The race featuring two new co-presenters in Sunlife and Go For Gold offers a new and exciting triathlon competition that caters to both newbies and veteran triathletes that have competed in the Ironman 70.3 Philippines.

The 5150 race features a 1.5-kilometer swim, 40k bike, and 21k run which covers the towns of Panglao and Dauis. Meanwhile, the Go For Gold Sprint has half the distance of the 5150 race.

These two categories will be competed by various triathletes from different age groups and skill levels.

For Galura, one of the main reasons why they returned to Bohol was to make the island one of the kickstart spots of the vibrant Philippine triathlon scene that was badly affected by the pandemic.

“Bohol is part of our race calendar for the year. Bohol is a perfect starter to hold triathlon races again in the country. Bohol’s terrain is very flat, its community is very friendly. In short, perfect ang Bohol to have a triathlon race like this,” explained Galura.

Bohol’s economy and its tourism sector are still recovering from both the Covid-19 pandemic and last December’s super Typhoon Odette that ravaged the island.

With the triathlon race happening tomorrow in Panglao, it is expected to speed up the recovery of its tourism sector and bring in a lot of positive impact to it, according to Arcay.

“This impacts Panglao in a very positive way. This is the first time in Panglao in five years to have a triathlon again. So, we’re very happy that Sunrise kicks off their triathlon season in Bohol,” said Arcay.

For Vice Governor Balite, he is very optimistic that the race could kickstart an uptrend in the island’s tourism sector, considering Bohol is one of the country’s best destinations for natural attractions.

Galura, reassured the Boholanos that their race will bring great positivity to their community and tourism by explaining that most of their triathletes usually bring with them their family, friends, and fellow athletes in Bohol.

With this alone, they are estimating more than a thousand visitors to Panglao Island for the event tomorrow. Hotels, Air B&Bs, resorts, and beach houses are fully-booked in Panglao since Thursday due to the influx of visitors to the island for the race.

“Each triathlete has a family or friends that goes with them. Around a thousand visitors are now in Panglao for this race. Agad-agad nagkakaroon ng ripple effect on Bohol’s tourism dahil sa race na ito,” added Galura.

Sunday’s race is an essential competition for many triathletes who are planning to vie on August 7’s Ironman 70.3 Philippines in Mactan Island, Cebu.  /rcg