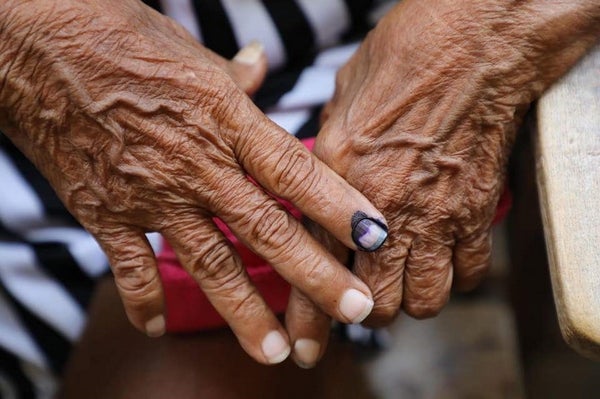 File: This elderly woman, with indelible ink in her right point finger, traveled a distance to exercise her right of suffrage in Tuburan National School in the May 14, 2018 elections. | File Photo

CEBU CITY, Philippines – An official of the Commission on Elections in Cebu City (Comelec-Cebu City) clarified to voters that there is no law yet postponing the village and youth elections this December amid speculations that may have affected voter registration turnout.

Comelec-Cebu City would record between 400 to 600 registrants from all of their off-site registration centers in a day, Sarno added.

The Comelec official, however, admitted that speculations and reports of lawmakers seeking to postpone the Barangay and SK polls have affected recent voter turnouts.

For the North District, registration will be at Robinsons Galleria Cebu from July 18 to 23.

Voters aged 15 to 30 years old can vote in the barangay and SK elections.

Those who need to transfer their voter registration to a new barangay or even a city or municipality will also be accommodated at the offsite registration.