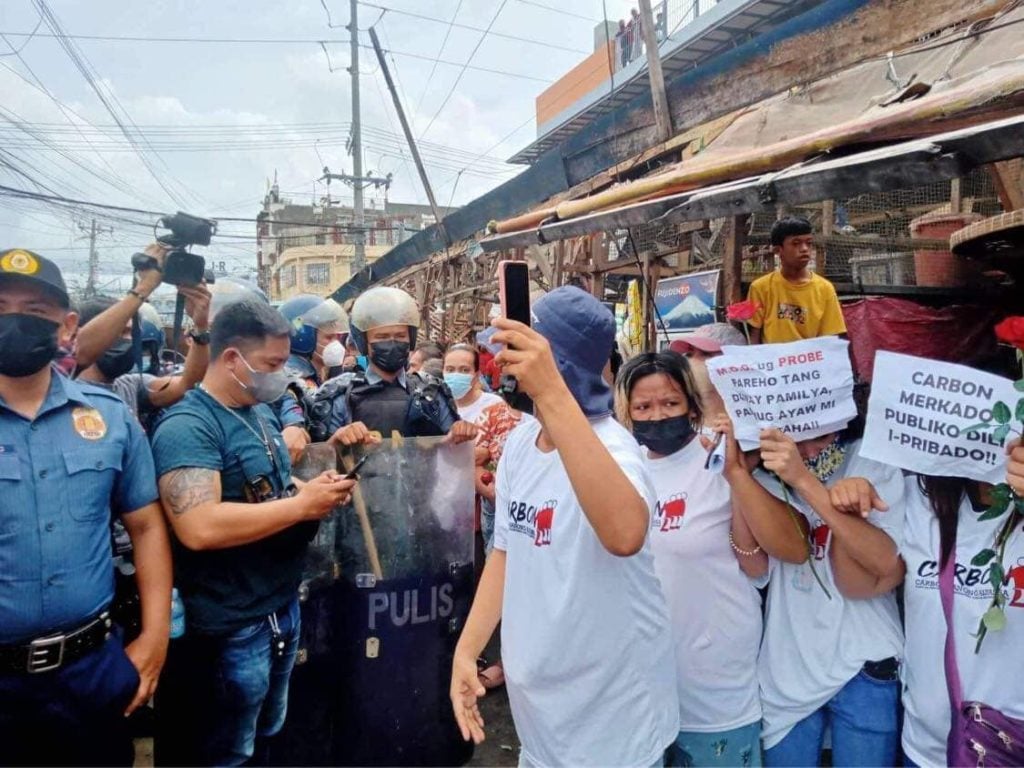 Police Lieutenant Colonel Wilbert Parilla, Deputy Director for Administration of the Cebu City Police Office (CCPO), said the commotion between the authorities and the vendors just lasted for a little while.

Parilla was referring to some of the protesting vendors trying to break through the line of policemen, who were bringing shields and deployed there, to prevent the vendors from intervening with the clearing operations.

Police Lieutenant Colonel Janette Rafter, CCPO Deputy director for operations, for her part, said almost 200 security personnel including force multipliers were deployed to secure the area during the demolition activity in Carbon Market on Monday morning.

In a statement, the Carbonhanong Alyansa Alang sa Reporma Ug Bahandianong Ogma sa Mga Nanginabuhi (CARBON) said vendors would want to “save Carbon” and keep its current status as a public market.

The City’s Market Authority issued on July 13, 2022 a notice directing all market occupants to transfer to the interim market on or before July 18 to pave the way for construction works for the ongoing Carbon Market modernization project.

Joanna Ariosa, spokesperson of the CARBON alliance, said what the City government did to the vendors was “unconscientious.”

(Our call to the City Council is that they should be bothered by their conscience for what they did to the vendors. What happened now is that the vendors of Carbon are at a disadvantage.)

She also noted that there was no allegedly public consultation done with regards to the the project, which was approved and the Joint Venture Agreement (JVA) between the City government and the Megawide Construction Corp. for the Carbon Market modernization was signed.

Ariosa then continued to ask the City Council to review and amend some provisions in the JVA which she said were disadvantageous to the vendors.

(They should look at the contract and change the scary provisions because we, the vendors, we are not against making Carbon beautiful. If there are those who dream to make Carbon beautiful, we are the number one, who dreamt it.)

Ariosa said that they were against the planned shifting schedule of vendors who could sell their products in a modernized stall in the would-be modernized Carbon Market.

She said they were also wary of the yearly increase of taripa or rental fee under the modernized market.

In January this year, a Cebu City Court dismissed the petition for a Temporary Restraining Order against the JVA which was filed by a multi-sectoral group including the CARBON alliance.

According to Presiding Judge Soliver Peras of the Regional Trial Court Branch 7, the TRO filed by the group was denied because they failed to substantiate their cause of action and that “there is no grave and irreparable injuries to be prevented.”

With the TRO being denied, the JVA provisions, entered into and signed by the City government and the Megawide will continue to be implemented.